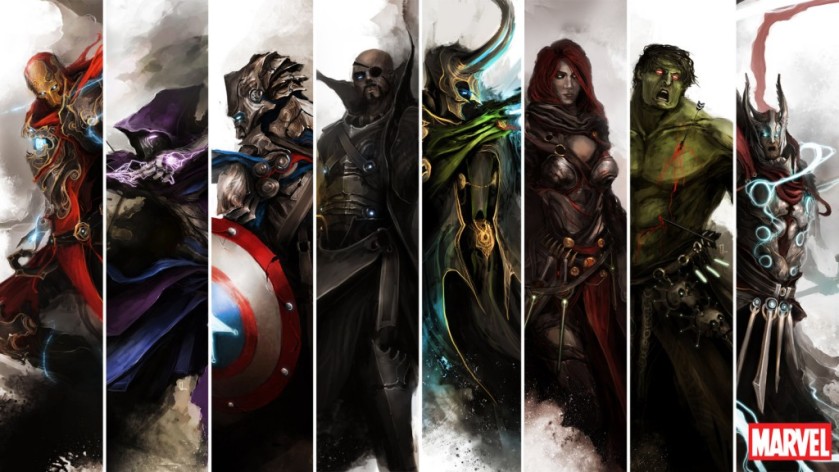 Sean was a panelist at Snake River Fandom Con 2018

He was on a panel called “D&D Characters in the Modern World & Vice Versa” with Scott C. Brown

This was a major topic of that panel.

Most of these characters will require at least some multi-classing, and for those I have linked to each classes multiclass article, so you can see more roleplay/narrative reasons behind those multiclasses. This should help you determine what your characters primary versus secondary classes would be.

There are lots of ideas you can base it on. So here are some real franchises that you can play as. Let’s start easy.

Lord of the Rings

This is easy because there are so many similarities between Dungeons & Dragons and Lord of the Rings.

Lets start with the Hobbits, which would come out to be halflings. We don’t really see any of them do any combat, so the basic you could go with is bard. We see Merry and Pippin convince Treebeard and the other trees to fight, Samwise sings a song for Gandalfs “death,” and its well rounded enough to work for Frodo as well. If anyone decides to go with Sam or Frodo however, make sure you dump a lot more into Constitution, because we see them go through some crazy stuff.

Next are the Hunters; Legolas, Gimli, and Aragorn.

Legolas is obviously Elf Ranger, however I would ask your DM that you receive maybe an Amulet of Feather Fall or something, to make up for Legolas’ light weight. If you remember, he literally walks on top of snow without sinking in. Also the whole jumping up the falling boulders of a bridge thing.

Gimli gets the obvious Dwarf Fighter. If you can remember anything else about him that would fit feel free to add it in, but it seems like Gimli is fairly basic.

Then Aragorn, who calls himself a ranger, but is more of a multiclass between Ranger and Fighter. He appears to be human, but if you remember, he lives much longer than humans do, but I’m not sure if there is a race for that in D&D, maybe Half-Elf, but has all of the appearances of human?

Gandalf is where things get a little tricky. He isn’t a human, more of an angel called Istari, which is why he could take on the Balrog. So maybe give him Aasimar instead? Then, he calls himself a wizard, but because of his Istari lineage, he was born with powers, so that would technically make him a Sorcerer. I would grant him a few levels in Fighter, because every now and then he pulls out that sword and kicks butt, again like we saw with the Balrog.

Everyone always gives Boromir a hard time, but he deserves a spot on this Fellowship. But because he is so simple, a Human Fighter would suffice.

Fun Fact: The most common Race/Class combo on DnDBeyond is Human Fighter, so don’t count it out.

Of course, you could also do a The Hobbit campaign for a challenge.

One Gandalf (preferably someone who might not be able to come to every session).

Everyone else are Dwarf Fighters. If you can get all 13, be my guest.

Of course, there is another hero in this story, that shows up for only a minute. Radagast the Brown, the Wizard/Druid. He has a sleigh that is pulled by rabbits, which is the most Druid thing I’ve ever heard.

Next we can go with one of the biggest franchises out right now, the Marvel Cinematic Universe.

Captain America, a Human Paladin, who stays on Lawful Good, definitely has shield proficiency, at least 1 level of monk for hand to hand combat, and 1 level of bard for his inspiring words. If you want to get really specific, his shield is called a “Rotella.” That is what that shield shape is called.

Iron Man (not Tony Stark) would be an Warforged Sorcerer. Warforged are basically metal men, and if you want to have the blasts of energy come out of your hands, your best bet would be Sorcerer. He is definitely chaotic good, unless you focus on other aspects to him like in Civil War, wherein he is much more Lawful Good. Lastly, make sure to dump as much as you can into Intelligence.

However, commenter S.C. points out that alternatively, you could play Tony Stark as a human(oid) Artificer, who built his own power armor.

Thor, like Gandalf, is not of the world in which we see them. He was worshipped as a god because he was such a strong alien, so I would give him Aasimar. With Mjolnir as his first weapon of choice, I jump to Barbarian, but when you look at his actual fighting style, it would be a Fighter with Dueling (Single weapon no shield), as well as Sorcerer, again because he was born with his powers. His weapon is a Dwarven Warhammer, one of his languages is Groot (Good luck finding that in the PHb), and he has History proficiency because he has lived for so long.

Hulk could actually be a really fun character. You would need two different character sheets, however. One as a Human, with no class, but high Intelligence score. Then once you roll for initiative (you might have to miss the first round of combat to make it more fair), you switch your character sheet to an Orc or Goliath Barbarian, with levels in Monk for the pugilist features and lack of armor bonuses. Narratively the change would be due to lycanthropy.

Hawkeye gets a little easier, he would just be a Human Rogue/Ranger multiclass. If you want to be a little more comic accurate, give him a disadvantage on awareness (hearing loss), but fluent in non-verbal communication, however you want to actualize that at the table.

Black Widow is also super easy, Human Rogue with focus on Assassin, and a higher Charisma score, to account for the ability to seduce practically everyone.

Ant-Man gets a little difficult. I would probably go with Changeling Druid with an affinity for insects. Then as you level up more (probably lvl 11 or 17), ask your DM if you can add Giant into your skill set, via a little homebrewing of course.

Spider-Man would probably stay as a Human as well, probably go with Monk with Slippers of Spider Climbing, and learn how to use rope as an improvised weapon.

Doctor Strange is a Human Wizard, even though he calls himself the Sorcerer Supreme. He is about as Min/Maxed as he can get.

Scarlet Witch would actually be the Sorcerer, and I’m not sure if her race is really specific.

Going into the Guardians of the Galaxy, Star Lord is an Artificer, once again pointed out by commenter S.C.

Gamora is another Rogue Assassin, like Black Widow, but instead of having a higher Charisma score, would probably fall under Tiefling, seeing as how people look at her and immediately have a negative response.

Drax definitely gets Half-Orc Barbarian, with Proficiency in Short Swords, and the lowest Wisdom score at the table. Definitely the most fun roleplay character I’m sure.

Getting into the Netflix shows, we have Daredevil, who is a Fighter, with some Monk for the Pugilist. He is also blind, but with Blindsight, which in some scenarios is better, as seen in the show.

Iron Fist is a Human Monk with some levels in Cleric, as we saw in the first season, when he learns how to heal people with his Chi (Ki).

If you know how to classify Jessica Jones or Luke Cage, comment below, because I don’t know if you really can very well.

Lastly is an honorable mention, in the Planet Hulk series, there is a “What If…” run in which we see Captain America, but he is a Fighter/Barbarian, that has a T. Rex Familiar. Don’t believe me?

Moving on to other Marvel Characters, we have Wolverine, who would be a Barbarian/Monk with daggers, but I would probably go with Hobgoblin, for their focus on war and combat, the only downside is they range from 6-7 feet tall, where as Logan is historically very short in the comics.

Storm would be a Genasi Cleric with the Tempest Domain, allowing her to cast Gust of Wind, Call Lightning, and Destructive Wave. The Genasi reinforces her aptitude to the elements. Iceman would also fall under Genasi Cleric with Tempest, even though Ice Storm doesn’t become available until 7th spell level.

Beast would fall under Bugbear Monk, which would be the coolest combination I think I’ve written so far. I just realized I have seriously underestimated Beast.

Lastly Professor X I guess would be a Wizard that has high levels of Enchantment.

The DC comic characters are all written to be gods, as opposed to Marvel characters, which makes it a little more difficult, but let’s see what we can do.

Batman has so many different aspects to him, that you might have to pick one or two to focus on. Personally, I would do Human Fighter/Rogue for his sneaking around in the dark and taking people out, like we see in the Arkham video games. However, that ignores his serious Martial Arts capabilities, so Monk/Rogue? We haven’t touched on his detective work (which is why the comic company is called Detective Comics in the first place), which leads much more towards Ranger. Other races could also fall as Changeling for his ability to hide in plain sight. Hardcore on the Chaotic Good, because he literally only has one rule, and in some versions he breaks that one rule.

The Joker, however, would be a Rogue/Bard in most iterations. Chaotic Evil, obviously.

Aquaman would probably be a Triton Barbarian, however that might change with the new movie. But Tritons are amphibious humanoids that are protectors of the seas.

Wonder Woman definitely gets Elven Fighter, but with some of the coolest magical weapons of all time.

There are other cool characters you might want to play as, such as Jedi, who are Cleric/Paladins, and the Cleric would be the Light Domain and Dueling fighting style.

Merlin would be a Sorcerer/Wizard, as a master of all magic.

Vin Diesel, who is a huge D&D fan, was in a movie Witch Hunter, wherein he played his own character Melkor, a Sorcerer/Ranger.

Also, there is the book/videogame series Witcher, wherein you play a Warlock/Fighter.

Where do you get inspiration for your characters? Let us know in the comments below!