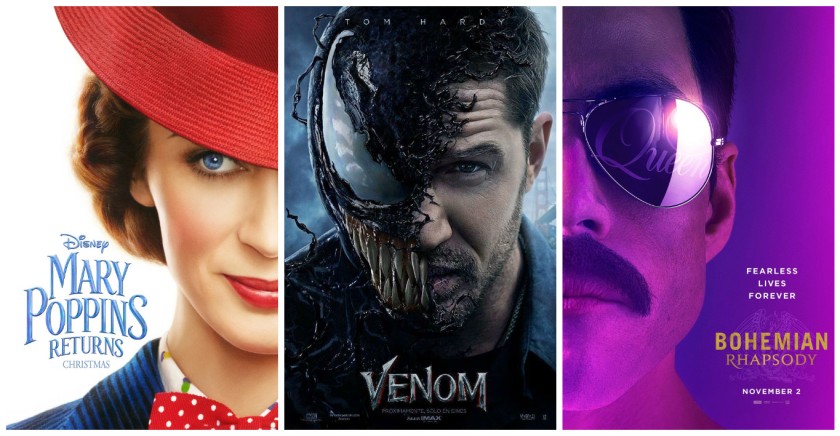 Every season a bunch of movies come out, and I’m here to tell you what I think most deserves your money each weekend.

The House with a Clock in Its Walls

A young orphan named Lewis Barnavelt aids his magical uncle in locating a clock with the power to bring about the end of the world.

There is a kids halloween movie starring Jack Black, and there is a Goosebumps 2 movie, but they are not the same movie.

A group of troublemakers are forced to attend night school in hope that they’ll pass the GED exam to finish high school.

When Eddie Brock acquires the powers of a symbiote, he will have to release his alter-ego “Venom” to save his life.

This is either gonna be fantastic, or terrible. Let’s see if Tom Hardy can bring Venom into the MCU.

A look at the life of the astronaut, Neil Armstrong, and the legendary space mission that led him to become the first man to walk on the Moon on July 20, 1969

This film is already sparking controversy, but a good biopic is always fun.

Laurie Strode comes to her final confrontation with Michael Myers, the masked figure who has haunted her since she narrowly escaped his killing spree on Halloween night four decades ago.

Which timeline is this in? H20?

After a cyber-attack reveals the identity of all of the active undercover agents in Britain, Johnny English is forced to come out of retirement to find the mastermind hacker.

The Nutcracker and the Four Realms

A young girl is transported into a magical world of gingerbread soldiers and an army of mice.

A chronicle of the years leading up to Queen’s legendary appearance at the Live Aid (1985) concert.

A grumpy Grinch plots to ruin Christmas for the village of Whoville.

This weekend, a Sherlock Holmes movie comes out, and a Grinch movie comes out. One stars Benedict Cumberbatch and the other Will Ferrell, how did we get those two wrong?

Fantastic Beasts: The Crimes of Grindelwald

If you don’t go see this, I don’t know why you’re even here.

Six years after the events of “Wreck-It Ralph,” Ralph and Vanellope, now friends, discover a wi-fi router in their arcade, leading them into a new adventure.

A war-hardened Crusader and his Moorish commander mount an audacious revolt against the corrupt English crown in a thrilling action-adventure packed with gritty battlefield exploits, mind-blowing fight choreography, and a timeless romance.

We can still do more gritty versions of classic stories, right?

Last week was Thanksgiving, so when you wake up from your food coma, you probably missed something. Go catch up.

Mary Stuart’s attempt to overthrow her cousin Elizabeth I, Queen of England, finds her condemned to years of imprisonment before facing execution.

Spider-Man: Into the Spider-Verse

Spider-Man crosses parallel dimensions and teams up with the Spider-Men of those dimensions to stop a threat to all reality.

Many years after the “Sixty Minute War,” cities survive a now desolate Earth by moving around on giant wheels attacking and devouring smaller towns to replenish their resources.

Try not to think of that one scene from Moana.

Arthur Curry learns that he is the heir to the underwater kingdom of Atlantis, and must step forward to lead his people and be a hero to the world.

So Ben Affleck isn’t Batman anymore. Henry Cavill isn’t Superman anymore. Let’s see if Jason Mamoa can save the Worlds of DC from falling even further.

On the run in the year 1987, Bumblebee finds refuge in a junkyard in a small Californian beach town. Charlie, on the cusp of turning 18 and trying to find her place in the world, discovers Bumblebee, battle-scarred and broken.

In Depression-era London, a now-grown Jane and Michael Banks, along with Michael’s three children, are visited by the enigmatic Mary Poppins following a personal loss. Through her unique magical skills, and with the aid of her friend Jack, she helps the family rediscover the joy and wonder missing in their lives.

I’ll be honest, I’m gonna see this for Lin-Manuel Miranda more than anything else.

An action-packed story of one young woman’s journey to discover the truth of who she is and her fight to change the world.

What movie are you most looking forward to this Fall? Let us know in the comments below!