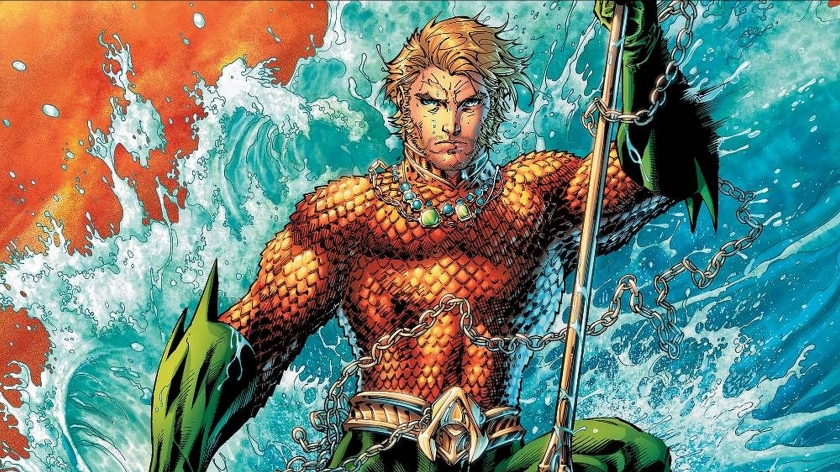 Aquaman has been given a lot of flack in the past. He’s often the brunt of any superhero joke and never seems to get the respect he deserves as a character. Every superhero goes through an awkward stage in their comics. Most comic book characters make it out of the awkward phase pretty unscathed with a sweet reboot of the universe. Sadly, most people’s perception of Aquaman (the orange and green scale wearing Atlantean riding a seahorse) has seemingly been impossible to shake. The New 52 did a great job of taking those things that made him ridiculous and letting them play into making him a better character. Something that Aquaman director James Wan said he was trying to accomplish. We’ve seen Jason Mamoa as Aquaman in Justice League, but with the release of the new Aquaman trailer, lets take a look at the comic book elements that will play into this movie.

It looks like this movie will be following the New 52 run on Aquaman’s story (i.e. Throne of Atlantis, The Trench, etc). Arthur Curry (played by Jason Mamoa) was born to Queen Atlanna (Nicole Kidman) of Atlantis and a lighthouse keeper named Tom Curry (Temuera Morrison). Atlanna left Tom to tend to her kingdom and he was to raise Arthur alone.

Arthur began to show Atlantean characteristics as he grew. So Tom turned to Doctor Stephen Shin (portrayed by Randall Park) who specialized in Atlantean Research. When Arthur was graduating from high school, Doctor Shin planned to release his research to the world. Tom thwarted his attempts and destroyed the evidence (minus a phial of Arthur’s blood). Dr. Shin hired Black Manta (played by Yahya Abdul-Mateen II) to get the blood back.

In the ensuing battle, Tom suffered a heart attack which killed him. Arthur went on a journey to find Black Manta and exact revenge. His quest took him to an Atlantean named Vulko (portrayed by Willem Dafoe). Vulko was the royal advisor to Queen Atlanna and upon meeting Arthur, took him to Atlantis to educate him on his birthright, to train him to fight like an Atlantean warrior and be the King he was meant to be (since Queen Atlanna had been deceased).

The Throne of Atlantis

It was in Atlantis that he would meet Mera (played by Amber Heard), who was originally sent to assassinate him from her parents, the King and Queen of Xebel. But she fell in love with him and they were married. Arthur ruled as the King of Atlantis for a time, but fled back to the surface to pursue a life on land with Mera, because he felt that he wasn’t himself as the King of Atlantis. They began to protect the shores of Boston from The Trench, an underwater species living deep in the ocean (we see this in the trailer).

It was after this time that he met Batman, Superman, and Wonder Woman and helped form the Justice League. Also at this time his half-brother Orm (played by Patrick Wilson) usurped the throne and took control of Atlantis. Turns out Orm ordered the assassination of Queen Atlanna years earlier, and with his newfound power, Orm took the title of Ocean Master and waged war upon the surface world. Aquaman and the Justice League quickly dispatched of Orm and quelled the threat.

After the battle with Orm, Arthur took his rightful place as King of Atlantis with Mera by his side. He is a skilled diplomat and constantly negotiates peace between the Atlanteans and the surface dwellers. He is a vital part of the DC Universe and a welcome member of the Justice League.

What are you excited for in the new movie? Let us know in the comments below!