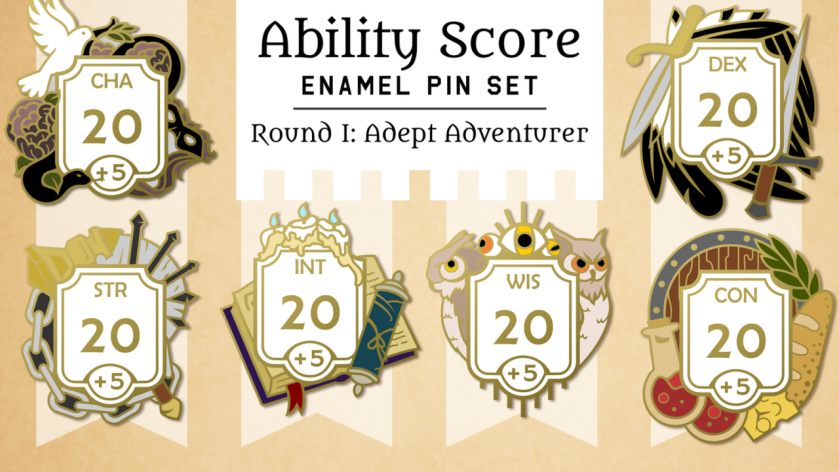 In Dungeons & Dragons, you have an entire sheet full of numbers that describe your character. Everything from how hard you can hit, good you can sneak, and how much you know about different Religions of the world. All of these numbers, however, all come from 6 specific numbers. Your Ability Scores.

These are the six most important quantitative aspects of your character, when it comes to a game about monster killing (other games have other aspects that are more helpful). We use these to get a comprehensive picture about the character you’ll be portraying in the game.

But what are your Ability Scores?

I have found three different methods to determine your score.

Back in the day, July 1977 to be precise, there was a magazine called Dragon Magazine, which was published as a companion piece to the rising in popularity game Dungeons & Dragons. This was not made by TSR, the creators of D&D, specifically, but was made with their help, much like DnDBeyond is today. In the 8th issue, an article titled “So, You Want Realism in D&D?”, where they explored a way to measure your Ability Scores. This was 8 issues before the article I referenced last week, where Gary Gaygax said that the goal of realism in D&D was antithetical to the idea of the game itself.

Either way, below was the way that they measured Ability Scores for real people.

I also want to say before we start, this was clearly meant to be a fun joke, not a comprehensive system.

Strength: To determine Strength, go to a gym and military press as much weight as you possibly can. Divide the number of pounds you lifted by 10; the result is your Strength rating.

I don’t know about you, but I don’t go to the gym very much (not since High School). I have no idea how much I can lift, and going to a gym that I don’t have a membership at to do a number of lifts, each increasing the amount until I probably hurt myself, is probably not a wise decision.

Dexterity: To determine your Dexterity, go down to the track at the local High School and run 440 yards. Subtract your time in seconds from 80, and the result is your Dexterity rating.

So a track around a 100 yard football field is 400 meters, first of all because we can’t decide whether or not we want to use the metric system. But 400 meters is 437 yards, so I guess just do the lap, and then one more step past where you started to find the total.

Taking the Covid based irony, or reality, aside, many people, myself included, attempt to work while sick, because sick pay is either limited, or employers are skeptical whenever their employees claim illness to not work.

You know how we all just go and take regular IQ tests? Also, Albert Einstein, the guy we all collectively accept as the smartest man in living memory, had an IQ of around 160. So if his Intelligence score was only a 16, what the heck is the party’s Wizard doing?

Wisdom: To determine your Wisdom, calculate the average number of hours you spend playing D&D or working on your D&D Campaign in an average week. Subtract the resulting number from 20 and this is your Wisdom.

This should really tip you off that the whole thing was a joke. This states that playing more D&D lowers your Wisdom score. In that case, I think I’m sitting at a 9 Wisdom.

Charisma: To determine Charisma, count up the number of times you have appeared on TV or have had your picture printed in the newspaper. Multiply this number by 2, and the result is your Charisma Rating.

I feel like if this was published today, it would say something more about your Social Media followers.

Another, much simpler way to think about your Ability Scores, is to compare yourself with an NPC. A completely normal basic villager has 10s down the board. But the Appendix B in the Monster Manual has a series of NPCs that are good templates, and with the ones we have in the real world, let’s see where you lie.

Acolyte – Junior members of a clergy. If you are a Student, you are comparable, but I’d swap the Wisdom stat with Intelligence if you’re studying an academic subject, or maybe Charisma if you’re in the arts.

Commoner – Set here as a baseline. Have more confidence in yourself, you’re more than pure average.

Gladiator – Fight for entertainment. If you do boxing, or MMA, this is probably you, but only if it’s something you do Full Time.

Priest – Like the Acolyte, but a Teacher instead of a Student.

Thug – Violent work for money. I guess if you’re the muscle for a mob. Is that still a thing, or do the movies lie to me?

Veteran – We have Veterans, members of our military. If you’re retired, think about the last time you passed your PT test.

The big gap here, is that all of the stats are for people that the game expects you to fight with, or at least come into conflict with as a fighter. Most of us (hopefully) are not combative people, and so this too is a limited set of examples.

My favorite way to find your stats, is to compare yourself to other people in the real world.

A way to simplify your Strength, is your ability to move an object. In bodybuilding terms, the most amount you can move at least once is your One Repetition Maximum, or 1RM. There are two ways to determine your 1RM. The most obvious is by training and learning your Personal Record, but if you don’t do this regularly, you could seriously injure yourself by pushing to the max without proper form or warming up, or knowing what you can and can’t handle. For this reason, you can also take a weight you know that you can move (lift, push, pull) and do it as many times until you can’t, or To Failure, and the total count is your Rep(etition) count.

There are a couple different ways to measure this, but the first way is the Boyd Epley formula, who was a Hall of Fame College Strength Coach for Nebraska.

Also, I’ll put a link to each 28 measure, so you can see the record, and why I determined that to be the maximum possible.

For this, there are two types of Dexterity in D&D. One type is the Acrobatics type, how well you can move your body, which follows with Dexterity Saving Throws. However, your ability to jump out of the way is not the same talent as your ability to perform Sleight of Hand or picking locks. For this reason, I have two different scales. I guess you could average the two out, or use your lower score, but use Proficiency on your better one, but if you want to feel more heroic, just use the score that you’re better at.

First, we have the 400 meter Dash for the Acrobatics type. Then, next to that, usually a way to measure hand dexterity is with the Perdue Pegboard Test, but that can be hard to come by, so let’s use something comparable, your typing speed on computers. You can easily Google a type speed test to see how many Words Per Minute you can type.

Constitution is tough, because it is, well, toughness, which is hard to measure. Because it determines your HIt Points, the most accurate way might be to see how many times you can be hit with a punch of 1 Newton of force, or one kilogram meter per second squared. But I’m not going to ask you to get hit a bunch of times. Instead, we are going to go back to Saving Throw styles. For this, I could think of two different styles. Either your ability to continue walking without stopping, or your resistance to poison. For the first, I have two different options for you, either the longest you can Run without stopping, or your time running a Marathon (26.2 miles). Then for poison, how many shots of hard liquor can you take within 24 hours. Also, it is hard to find a maximum amount of drinks without dying. If you can find a better source, please let me know.

TheNerdd asks that you drink responsibly, and not give yourself alcohol poisoning.

Intelligence is a tough one to measure, and IQ certainly seems to be the way to go. However, based on the previous measure, IQ/10, that would mean that Albert Einstein, a man largely recognized as one of the smartest people in History, would only have a 16, as his IQ was about 160. That’s not high enough in my opinion. However, if you don’t have an accurate IQ score, then the next best thing would be your score in your High School SAT/ACT Score. Unfortunately, it is not infinitely scalable, so the maximum possible score of the test will be an 18, which I feel is the highest you can get without proper formal (adult) training.

Unfortunately, this was the only Ability Score that I could fully not come up with a way to quantify, even inaccurately. I think this is why Dragon Magazine used it as an opportunity to make a joke. How can one truly measure your ability to think critically, and be wise? We can think of people, such as the Dalai Lama, who probably have a score well above 18, but to measure specifics would be, if not insulting, just inaccurate.

For Charisma, I could think of two different styles. The first, is your ability to make people enjoy your presence, perhaps like a Performance Check. The other, would be your ability to convince someone, like a Persuasion check. So first, I figured how many Twitter Followers you have could be a measure, though a highly manufactured one. The other, how many friends would help you move if you asked them to? According to Dunbar’s Number, you can have up to 150 friends of a decent relationship in your life, so that’s the maximum there.

Well, that’s three different ways to measure you D&D Ability Scores. Ultimately, it is impossible to quantify many of these, but hopefully this helps put into perspective what these scores mean on your character sheet, in a way that you can more honestly compare to real life.

If you think I’m way off, that’s probably fair.

What do you think your Ability Scores are? Let me know in the comments below!