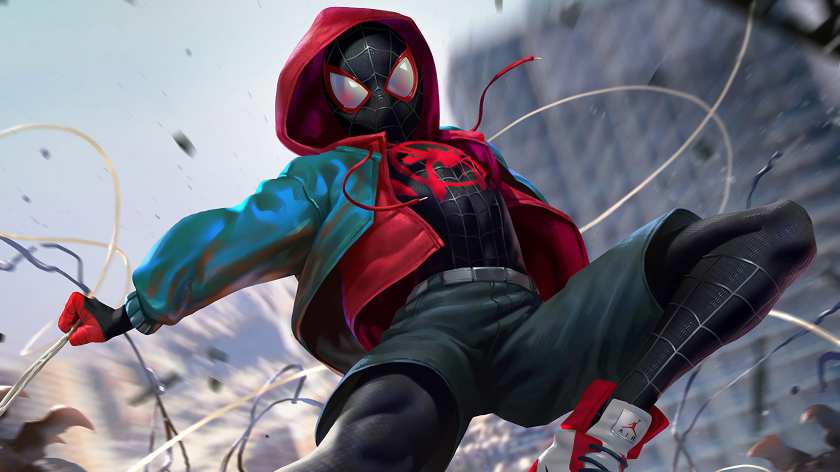 Miles Morales, the Ultimate Spider-Man. This amazing hero has been all over the place lately, so I thought it would be cool to look more into how he came about. I have heard bits and pieces before, but let’s take a deep dive on how this non-Peter Parker Spider-Man rose to popularity.

We are all familiar with who Spider-Man is. Peter Parker, the awkward kid who likes to take photos, and is a big ol’ science nerd. When Stan Lee made him, not only did he base his personality on his own as a kid, but also covered him from head to toe in a costume, so that anyone could imagine themselves under the mask as well. Spider-Man is potentially the most relatable superhero character ever, and it’s only become moreso with the new version of him.

The idea of changing Spider-Man from Peter Parker began back in 2008, after Barack Obama was elected as US President. It was part of the Ultimate Marvel Universe, which started back in 2000, and lasted until 2015, and was about recreating Marvel for the newer audience. Some changes that were made include making Nick Fury look like Samuel L. Jackson, an amazing bit of foreshadowing.

The folks over at Marvel, specifically the Editor-In-Chief Axel Alonso, who had worked on Spider-Man comics since around 2000, wanted to take a look at one of, if not the, most iconic superheroes Marvel had. Was it time that Spider-Man had a change? Fans began petitioning that Donald Glover, who had recently become popular due to the show Community, should play Spider-Man in a new Spider-Man movie, that eventually went to Andrew Garfield.

Well, in Season Two of the show, Glover appeared on screen wearing Spider-Man pajamas, as a reference to the #Donald4Spiderman Twitter campaign. This was the moment that Brian Michael Bendis was waiting for. Bendis, known for his rebooting of Daredevil and Jessica Jones into the versions that were adapted for Netflix shows, took on the new direction with this new Spider-Man.

Miles Morales is a half-latino half-black character, from Brooklyn, who initially didn’t want to become a superhero at all. He was bit by a radioactive spider that his uncle Aaron Davis (secretly a supervillain) had stolen from Oscorp. Still unsure of his destiny, he witnessed firsthand the final battle between Peter Parker Spider-Man and Green Goblin, wherein they both die by each other’s hand. These deaths are what inspire him to join the hero ranks, which S.H.I.E.L.D. helps him with.

His powers are largely the same as Peter Parker’s, but with two additions. Miles Morales can electrocute people with a “Venom Blast,” as well as practically turn himself invisible.

While some people didn’t like the new Spider-Man, many fans greatly adore him. He quickly got his own animated show Ultimate Spider-Man, where Morales is voiced by Glover, to the excitement of fans.

Then, in the Marvel Cinematic Universe film Spider-Man: Homecoming, we see another Glover appearance, as he plays a villain named Aaron Davis who has “a nephew that lives here.”

Finally of course we have Spider-Man: Into the Spider-verse, arguably the best Spider-Man movie to date, that follows Miles Morales as he becomes Spider-Man, and witnesses the death of Peter Parker, and realizes he needs to become a hero as well.

I’ve talked about how great this movie is before on here, but if you haven’t seen it before, you are sorely missing out. Not only is it a great movie, but the comedy in it is fantastic, and the animation is unlike anything I’ve ever seen before.

One of the more popular video games of 2018 was Spider-Man on the PS4. In it you play as Peter Parker, swinging around New York and saving people. There are, however, specific stealth missions where you play as Miles Morales instead. Then in the DLC The City that Never Sleeps, you play as Peter, training Miles to become the new Spider-Man.

Lastly, as of this Thursday, Miles Morales will have his own video game, Spider-Man: Miles Morales for the PS4 and new PS5. While this game is an expansion (bigger than a DLC, smaller than a full game, like Assassin’s Creed III: Liberation), it will focus entirely on our new Spider-hero.

Be greater. Be yourself.

Experience the rise of Miles Morales as the new hero masters incredible, explosive new powers to become his own Spider-Man.
In the latest adventure in the Marvel’s Spider-Man universe, teenager Miles Morales is adjusting to his new home while following in the footsteps of his mentor, Peter Parker, as a new Spider-Man.

But when a fierce power struggle threatens to destroy his new home, the aspiring hero realizes that with great power, there must also come great responsibility. To save all of Marvel’s New York, Miles must take up the mantle of Spider-Man and own it.

A fun release-day skin that you can get, has the animation from the Into the Spider-Verse movie we mentioned above. This might be the only time that a lower framerate looks cooler than the game normally.

What’s your favorite Miles Morales moment? Let us know in the comments below!