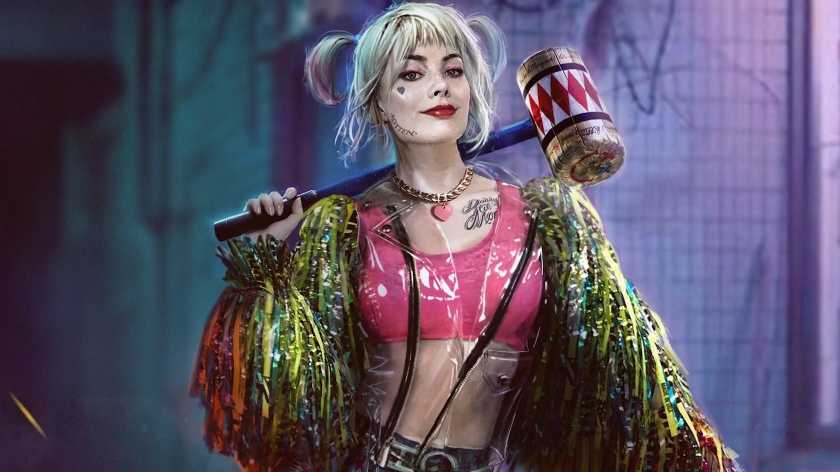 With Birds of Prey (and the Fantabulous Emancipation of One Harley Quinn) coming out on Friday, we thought we would give Harleen Quinzel the spotlight for a moment, as we are very much usually focused on the Joker (which of course seems to be a focused plotline of the movie itself).

In the 22nd episode of Batman: The Animated Series, the story includes the Joker busting out of a cake during a celebratory dinner for Commissioner Gordon. There was a moment where they thought it might be too silly for the Joker himself to bust out of the cake (they did it anyway), so instead they created a female sidekick for the Harlequin of Hate, and named her Harley Quinn.

Since then, Harley Quinn has become a very popular character, and has gone through many different designs and actors. At this point, it is safe to say that Tara Strong is the definitive Harley Quinn, as she has voiced the character in a total of 34 projects.

However, for the first ten or so, she kept the classic look of a red and black unitard.

Then, with the creation of Batman: Arkham Asylum, a push was made to make Harley a little more risque.

As time went on, every comic character has to have an origin story, and so Harley Quinns came about after the Arkham Asylum game, and determined that it could have been in that very asylum that she and The Joker met, with her being his psychologist, Dr. Harleen Quinzel. This was confirmed during the New 52 reboot, when many characters had upgraded looks and backstories. There was positive reactions to Harley’s new, more “adult,” look, and the artists listened.

Once again, in the DC Rebirth reboot, when characters were updated, Harley had a less extreme change in her look, but still focusing on the more sexual aspects of the character.

For the most part, the characterization of Harley Quinn has been standard, high pitched New York/Jersey accent, currently in or recently left a relationship with the Joker, history of mental psychology at Arkham, and usually at least a little sexual. Some other outfits of note are from the Injustice videogame, or the kid-centric DC Superhero Girls, where they made her not as revealing, because the show was intended for children.

So now we have reached the first Live Action Harley Quinn, played by the amazing Margot Robbie in Suicide Squad, the upcoming The Suicide Squad, and of course Birds of Prey (and the Fantabulous Emancipation of One Harley Quinn). Her outfit was clearly heavily inspired by the New 52/DC Rebirth versions of her design.

Of course, there is also the show Harley Quinn on the DC Universe streaming platform, with the voice acting of Kaley Cuoco, and was created by the Paul Dini, the guy who created the character in the first place. The show is much more adult, with swear words and partial nudity in the trailers. The show, while on a streaming service not many have subscribed to, has gotten glowing reviews. This isn’t a surprise, since DC often does very, very well with their animated properties.

Lastly, the character has quickly become a fan favorite, and anytime that happens, there are cosplays to be found. Below are some that I’ve found that I think are fantastic, as well as one that my wife and I did while working at a grocery store.

What’s your favorite version of Harley Quinn? Let us know in the comments below!