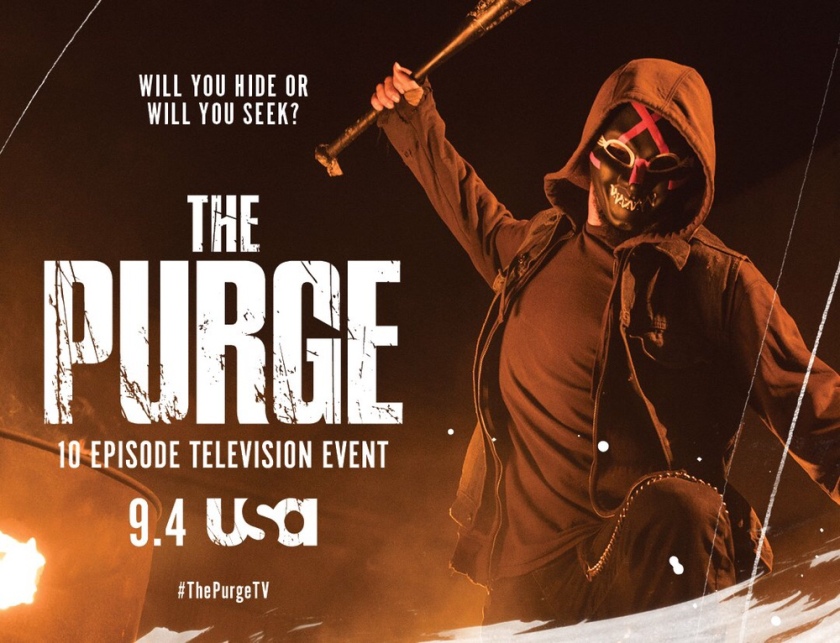 A series of movies by Blumhouse, and now a new TV show, The Purge has become very popular over the past five years, which is interesting for a number of reasons.

There are a lot of movies that come out every year in theaters, and a lot of them become fairly popular, fairly quickly. But my attention is drawn to The Purge firstly because it is a horror movie. Not to say that horror movies don’t get popular, because they most certainly do, such as Saw or It.

There is just something different, I think, about the popularity of the Purge movies. It has something to do with the fact that it has redefined the word “Purge,” from something that meant to get rid of, to a governmentally sanctioned murder spree.

Not everyone has seen the Purge movies though. While Avengers: Age of Ultron made $459 Mill over the course of it’s cinematic release, the largest pull in for Purge was $79 Mill with Purge: Election Year. Not everyone on the street can name Ultron, but everyone is familiar with the concept of The Purge.

Switching gears, there is a lot of political commentary in the Purge movies. It’s always been shown that the most common victims of the Purge are poorer citizens, living in densely populated urban areas, and are more often than not, non-white. Add in the lack of any kind of “gun regulation” conversation, and it is clear that the creators of these movies are pointing fingers at right-wing conservative ideologies, implying that this is the world that the GOP wants.

There is a romantic notion in these films that attract our basic instincts. The basis of survivability stems from being number one. When another being is better than us, or makes us worse, our sub-subconcious wants that person dead. This can come from taking someone’s stuff, or if they have wronged us in any way. From an evolutionary standpoint, we want our genes to pass on, combined with the best mate available, so that our genes can continue to improve.

Popular comedy site/YouTube channel CollegeHumor did a mini-series on living in the Purge. WARNING! VIOLENCE AND LANGUAGE! NSFW VIDEO!

Wisecrack also does really well at breaking down the reasons behind the things we enjoy, such as this video on The Purge, tied in with the Purge episode of Rick and Morty.

It’s such a simple premise, but with a lot of nuance behind it. To be honest, I’m not sure how much of the underlying commentary they really intended with the first movie. It might be that with each installment they notice and exemplify another aspect of the social implications.

I’m really excited for the new tv show, because we mentioned back in February of 2017 how The Purge should be made into a TV show. We said AMC, and it’s instead going to be on USA Network, but that usually falls down more to licensing deals rather than artistic direction.

So all in all, a very simple, very strong idea such as The Purge is able to plant a seed into the cultural hive mind, even without everyone watching the films.

Do you like The Purge? Let us know in the comments below!