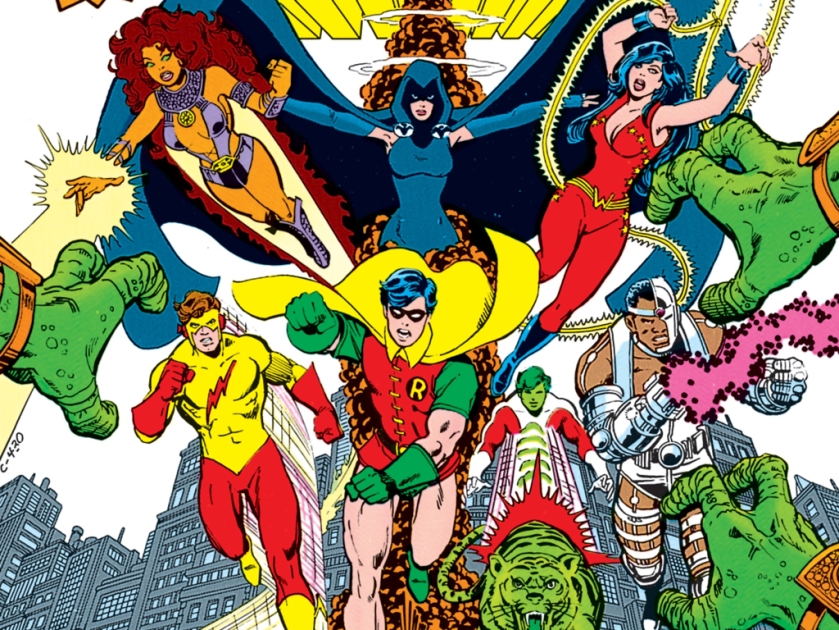 The Teen Titans have received a lot of good coverage over the years, more so than a lot of other superhero teams that DC and Marvel have to offer. With cartoons like the original Teen Titans and the questionably abysmal Teen Titans Go!, these characters have become beloved legends of the DC canon. It’s a crew of heroes that would seemingly appeal to younger viewers (hence the name). But those who grew up reading the original comics in 1964 hold a dear place in their hearts for these charming individuals. Showcasing their new streaming service, DC has announced a live action TV show revolving around these characters titled Titans. So lets take a look at the original members of the team and how it has evolved over the years.

The original Teen Titans was founded by Kid Flash (Wally West), Robin (Dick Grayson), and Aqualad, (Garth). The first comic was released as The Brave and the Bold #54 in 1964. It’s original intent was to reach the youth culture and it’s writing was meant to appeal to the teenagers reading comics at the time (so most of the missions they went on were answering calls to help teenagers). Their first adversary was a weather based villain named Mister Twister. Soon after the team was solidified with the additions of Wonder Girl (Donna Troy), and Speedy (Roy Harper).

As the Teen Titans comics started to fall out of favor with the fans, it was later reinvented in the 1980s as the New Teen Titans. With this revamp of the classic team it saw the additions of the characters we know and love as seen in the Cartoon Network classic. The team had now grown a little older and saw additions to the team with Cyborg, Raven, Starfire, Lilith, and Beast Boy. All have become fan favorites and are endearing characters in their own right. It was this particular team that led to the critically and commercially acclaimed comic book story line, “The Judas Contract”.

The 2000s saw a big change to the team. The Teen Titans now consisted of some familiar faces, but this times with the likes of Tim Drake as Robin, Cassie Sandsmark as Wonder Girl, and Bart Allen as Kid Flash. Miss Martian, Ravager (Rose Wilson), Supergirl (Kara Zor-El), Blue Beetle (Jaime Reyes), and Superboy (Con-el), were later added to the team, almost mirroring the team seen in Young Justice. Concurrently, the original Teen Titans (led by Dick Grayson as Nightwing), were published by DC in a comic called Titans that ran alongside the Teen Titans.

DC’s New 52 reboot saw another jarring change to the Teen Titans roster because now we see Kid Flash (Bart Allen), Wonder Girl (Cassie Sandsmark), and Robin (Tim Drake) return as the founding members. But the additions to the team were Solstice (Kiran Singh), Bunker (Miguel Jose Barragan), and Skitter (Celine Patterson) with Superboy (Con-El) stepping in sometimes. Sadly, this comic book run was somewhat of a let down to fans of the beloved team and was later set straight in DC’s Rebirth.

DC’s Rebirth set the record straight as to who was a Titan and who was a Teen Titan. With this iteration and the return of the original Wally West, we see all of our heroes from the classic team as the definitive Titans: Nightwing (Dick Grayson), Wonder Girl (Donna Troy), The Flash (Wally West), Arsenal (Roy Harper), Omen (Lilith Clay), and Tempest (Garth). The Teen Titans are now a younger team of the actually teenage heroes with some familiar characters: Robin (Damien Wayne), Kid Flash (Wally West II), Raven, Starfire, Beast Boy, and sometimes Aqualad (Jackson Hyde).

In 2003 Cartoon Network aired one of the most beloved DC cartoons of all time, Teen Titans. We see Robin, Raven, Cyborg, Beast Boy, Starfire and many other recurring characters. It was this show that bridged the gap of comic book readers to the many people who watched the show. To many, this is the definitive team of Titans and the greatest story to be told with these characters. In 2006 it was cancelled to the dismay of many. In 2010 we would see Young Justice, a show with many of the same characters. Though it didn’t receive as much critical and commercial acclaim it was nonetheless a fan favorite and after it’s premature cancel in 2013 it will be renewed for a third season on DC’s streaming service. Lastly we come to what many consider the animated Teen Titan’s fall from grace known as Teen Titans Go! airing in 2013 with a movie in 2018. With a divisive fanbase it still runs on Cartoon Network giving a nonsensical and more cartoonish representation of the characters.

What is your definitive Teen Titans Team? Let us know in the comments below!