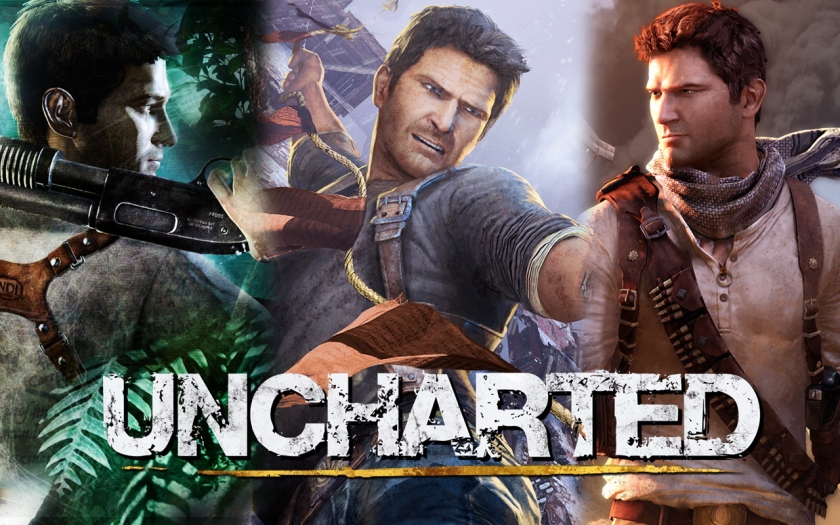 I just played the first three Uncharted games for the first time since Playstation released them for free along with Journey for their Play At Home Initiative. While this might be a cold take, as these games are between 9-13 years old, I’m new to this fandom, and I wanted to talk about it.

The series follows Nathan Drake, an Indiana Jones-type historian and treasure hunter, who follows the clues left behind of famous travelers of ages past, and tries to find what treasures they had and lost, or were simply trying to find themselves. He has a small team that he trusts, which include an almost-retired treasure hunter named Sully, a documentary filmmaker named Elena, and a thief from Drake’s burglary history named Chloe. the first three games follow Drake as he attempts to find El Dorado, Shambhala (Shangri-La), and the Lost City of Iram of the Pillars.

First of all, I’m a sucker for a good adventure story. In these games, Nathan Drake is no superhero, he’s not a brilliant scientist, nor is he so charismatic he can talk his way out of every situation. No, Nathan Drake is a realistic guy, with the only thing that seems unattainable is his “American Ninja Warrior” levels of upper body/fingertip strength. Outside of that, all of his success comes from studying and practicing, things anyone can do. There’s something about a character that can solve problems with what he has on him, or what he can find near him, no crazy tech or MacGyver style contraptions. We see the same thing not only in Indiana Jones, but also movies like Pirates of the Caribbean, or National Treasure.

So many video games get by on getting you, the player, from one action sequence to the next, and while Uncharted certainly has plenty of that, they make sure to have an actual story in between. You have the two best friends who have different reasons why they got into this line of work (grave-robbing), and it ultimately divides them and they have to work against each other. There’s the love triangle where one girl represents Drake’s past, and the other represents his future, and he struggles to find what he wants. And of course, each game is known for it’s monsters, and there are little hints and foreshadowing of what those monsters will be early in the game, that you only remember near the end when everything comes together like a jigsaw puzzle. The different games have also won a variety of Best Game Writing awards.

It’s hard to be a voice actor for video games! Not only do you record the main story’s lines, but also every sidequest, meaningless conversation, and about 50 different reaction noises from small fall, medium fall, big fall, light damage, medium damage, big damage, death, surprise, scared gasp, scared scream, and more, and you have to do all of them with the same amount of intensity and attention that you do a movie. Well, these actors certainly did their part, as they won the Game of the Year Award for Best Voice Acting, and best Performance by Nolan North, who voices Nathan Drake.

Sure, the games I’m playing are remastered for the PS4, and aren’t the original release graphics, but that doesn’t make them just great. Between the movement of hair and clothing, the sunset light diffraction, and more, it’s really enjoyable watching these games, just as much as playing them. The only downside I have with any of the graphics, is the shot-and-killed animation, where people look like they were shot on a trampoline, and shoot into the air.

It’s really interesting, how at times the mechanics remind you that the first game came out in 2007, and how it doesn’t compare to the first Assassin’s Creed game that came out one year later, but all of the running and shooting feels very natural and smooth. I never find myself thinking “What? I TOTALLY shot that guy!”, like I have in many, more modern games. The running is paced most of the time, giving you time to think and gives you a bigger window of opportunity for jumps or turns, and you can usually tell what you need to do next. The only moment I truly get frustrated is when I want to hide behind a wall, and Drake instead decides to roll away. Like I said, it’s not groundbreaking, but it’s smooth, and they didn’t try to do anything more than they needed (as long as we can all forget the Jet Ski section).

Well, next for me is I’m certainly going to be buying Uncharted 4, even though I’m four years behind this bandwagon. That’s not all, though, as you might have heard, a movie is in the works. It seems like it will be taking place after Sully decides to train Nathan Drake, but before he goes off on his own adventures, as young Tom Holland will be playing Drake, and not-so-old Mark Wahlberg will be Sully. Filming had started, but was paused due to the COVID-19 shut down. One major question, is if it will be influenced by the popular fan-made film, starring Nathan Fillion as Nathan Drake, which the VP of Naughty Dog enjoyed.

What’s your favorite part of the Uncharted games? Let us know in the comments below!