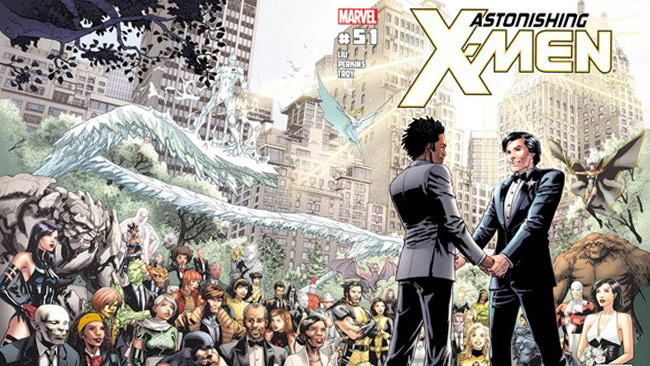 In a world where life can be scary and unpredictable, many people find solace in comics, video games, movies, and tv shows. These take us away from a world we don’t always want to be a part of; and transport us to another universe to get a breath of relief. The great thing about these forms of media is that people connect with them. We love our favorite characters because we relate to them on some level. The more a character is like us, or is dealing with the same issues as us, the more we care. This creates a beautiful opportunity in nerd culture to be more diverse and inclusive on all levels.

We also covered representation for Women and Minorities.

Today we are going to talk about the LGBTQIA+ community. This is an ongoing struggle that make many hesitant, especially with recent laws and events that have happened in the past few years. Though it wasn’t out in the spotlight as much a few decades ago, people still struggled to try and fit into a world that didn’t accept them for who they were. Fortunately, artists have recently started to include many characters with a great variation of orientations.

The first to tackle this was the X-Men. Created in 1963 by Stan Lee and Jack Kirby, the X-Men comics became a huge success for Marvel. Though the initial team of writers didn’t necessarily address these issues in their comics, by 1975 there was a new team, interested in adding diversity and turning the X-Men into a metaphor for the LGBT community. . The X-Men are mutants: a subspecies of human that have superhero powers. Because of this, some of the main conflicts come about because a majority of them were outcasts, or rejected by society entirely.

The characters felt they had to hide who they actually were from the world, which prompted Professor X to create the House of Xavier. There, people were accepting and it was a safe place for the heroes to be who they wanted. Some of the characters, like Anole, Shatterstar, Rictor, Karma, and Daken, have all come out as queer throughout the stories. A great example is Mystique, who not only is fluid, but can switch genders at will. Though for a long time many of the X-Men relationships weren’t allowed to be portrayed on screen, there was a breakthrough in 2012 when Northstar married Kyle Jindau. This made worldwide news, since it was the first depiction of a same-sex marriage in mainstream comics.

Since X-Men there have been a few other characters that have made headlines as well. Dumbledore, from Harry Potter, was revealed to be gay in 2007 by the author, J.K. Rowling. When there was resistance from people saying they “couldn’t see him in that way,” Rowling fought back by simply saying, “Maybe because gay people just look like… people?”

Another character is Captain Jack Harkness, who originally appeared in Doctor Who. He was the first openly pansexual character in that series, which skyrocketed his popularity – ultimately leading to the spinoff Torchwood. He became very popular on British television and is still a big public figure.

Additionally, there is Willow from Buffy the Vampire Slayer. She and Tara Maclay became one of the first lesbian couples on U.S. television. We also have a handful from AMC’s The Walking Dead including: Tara, Alisha, Aaron, Eric, Denise, and in the most recent episode, one of the main characters, Jesus.

There is a movement striving for support and rights up to this day, and we are in the midst of a vast social change. Unfortunately, many nerd fandoms are still lacking when it comes to providing characters for these communities to look to. The LGBTQIA+ community is one that many people are making an effort to try and include, but progress seems a little slow. Hopefully in the future nerd culture will grow even more to create worlds where there is diversity, support, and good representation for all of their fans.

Many people look to superheroes to give them hope in a fallen world, and when that hero is like you – suddenly it’s a little easier to get through the day. When you know there are others like you going through the same thing, you aren’t left feeling alone.

Who’s your favorite queer character? Let us know in the comments below!