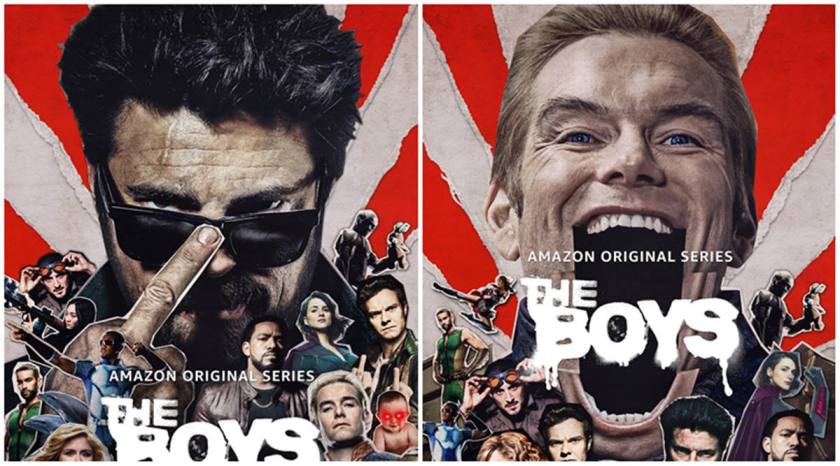 This Friday, season two of The Boys is premiering on Amazon Prime. When the first season came out last year, no one knew how good it would be. It came out around the same time as Watchmen and Umbrella Academy, and for some it was lost in this string of dark superhero TV shows. So if you are just now getting around to it now that you have heard hype for the second season, allow me to help you catch up. You should still watch the first season, but at least now you understand the show so you can be part of the conversation.

If you have watched season one already, this is a good reminder of who’s-who before you watch season two.

History of the Comic

In 2006, Garth Ennis, who is known for his work on Preacher, Judge Dredd, and Punisher, created this comic for WildStorm, a DC imprint, and later Dynamite Entertainment.

The comic follows a secret team in the CIA called “The Boys” whose jobs it was to monitor, and police, actual superheroes. In this world, superheroes, or “Supes,” are extremely famous, to the point that they act as many celebrities do. They do whatever they want, often hurting real people along the way, then act like role models when the cameras are turned on. The Boys keep track of their secret mistakes, and make sure that they learn their lesson, which is hard from a handful on non-superpowered guys.

With a total of 72 issues in the main storyline, and four miniseries’, the comic didn’t last an incredibly long time. However, it was nominated for various awards between 2008-2010.

Billy Butcher is the leader of the team, and in the show, is a former CIA operative. While in the comics the team is actively CIA, in the show they are more vigilantes, to the vigilantes. He is especially angry at superheroes, because he blames them for the disappearance of his wife. He is played by the amazing Karl Urban, who is just a ton of fun in this show.

Hughie Campbell is the new recruit. After a tragic accident that is the fault of an unapologetic superhero, Hughie joins the team and realizes someone has to keep these superheroes accountable. He doesn’t know much about fighting, but he’s clever and a fast learner.

Fun fact: in the comic, Hughie was drawn to look like Simon Pegg, and originally he was interested in playing the character. However, because it took 13 years for the show to be made, he aged out, and has a cameo role as Hughie’s father.

Mother’s Milk is a member of The Boys who is constantly looking for an excuse to leave the group, as he is a husband and father, and wants to fulfill his responsibilities to his family. Unfortunately Butcher is really good at convincing him to stay.

Frenchie is a spy-type character, who can build bombs and infiltrate. Unfortunately, he’s the wildcard of the group, doing things the way he sees best at any given moment, which puts him at odds with other members of the group.

Lastly, we have The Female, or Kimiko. She is mute and feral, and was experimented on, giving her enhanced strength and healing. All she wanted was a normal life, until she was kidnapped. Now, she wants revenge.

In another show, these would be our protagonists, as these are the superheroes in the world. Well, there are lots of superheroes, these are more like the Justice League, in a world full of superheroes. These are The Seven.

Homelander is the leader of the group. A mix of Superman and Captain America, he is everything you want out of a superhero.

Starlight is the newest member, after auditioning for the team, her Midwestern sensibilities are very pure and wholesome, and she has to balance her desire to save the day, with her coworkers and their more corrupt practices. It’s also worth mentioning that her and Hughie have a bit of a romantic sideplot going on, as they met while she was out of costume.

Queen Maeve is the Wonder Woman of the group. She was once like Starlight, but has become more and more disillusioned with the superhero life, but knows she can’t leave, because she too just wants to help people.

A-Train is the speedster. Desperate to hold onto his title, and reach the levels of fame he could achieve, he stops at nothing to be the hero on lunchboxes and billboards. He doesn’t want anything to get in his way of being Mr. Popular.

The Deep is an Aquaman type, but with a sex addiction. He wants to be taken seriously, but it’s hard sometimes when, as we all know, he “just talks to fish.”

Black Noir is an interesting character. He never speaks, you never see his face, but apparently does good work as a superhero. No one knows much about him, but he seems nice enough.

Translucent is the final member of The Seven, and he has the ability to turn himself invisible. Unfortunately he doesn’t have specialized clothing, so he does a lot of his work nude. This is only made worse by his habit of hanging out in the ladies bathroom.

Lastly, we have Madelyn Stillwell, who manages The Seven. You see, The Seven are technically employees of a company called Vought International, and she is their manager. Superheroes are treated like a mix between athletes and actors. They have representation and licensing deals, but are also assigned to different cities, based on what they can pay. Vought manages the Superhero industry as a whole, and is a formidable business woman who The Seven listen to, because they want their super-paychecks.

Like I said, comes out this Friday, and here’s a trailer. Light spoilers ahead.

Who’s your favorite character in The Boys? Let us know in the comments below!