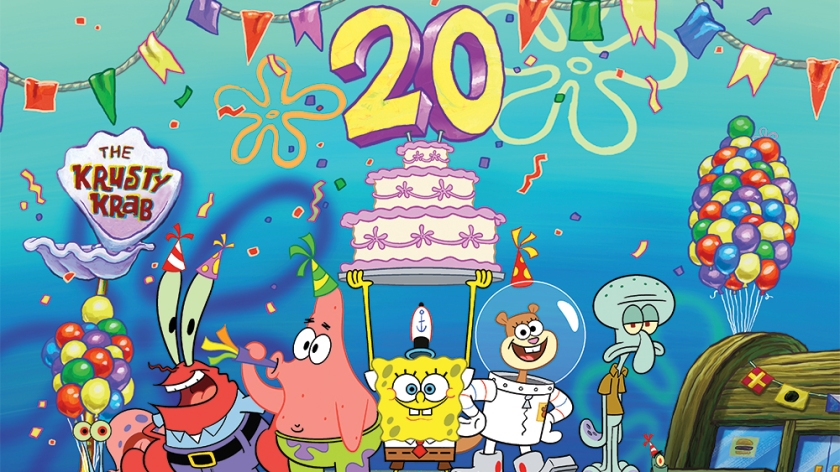 Spongebob’s Big Birthday Blowout is today! He is celebrating turning 20 years old! Not many kids cartoons make it past three seasons, which is why some have started calling Spongebob the “Simpson‘s of Kids Cartoons.” But why is Spongebob so successful? It’s hard to pin down the exact reason, so I decided to take a look at what I believe to be the three best kids cartoons, and see if I can see any similarities.

Created by Stephen Hillenberg, a lifelong student of marine biology, Spongebob is arguably more popular than Pokémon, which has dominated children’s entertainment for just as long. Hillenberg recently passed away at the age of 57 from ALS, less than a year from the 20 year celebration.

While I have been a fan of Spongebob since age 8, I couldn’t identify why I still find it so enjoyable, couldn’t quite name the magic. So instead, here are some other popular reasons:

Spongebob’s pure optimism makes him more enjoyable to watch, because he genuinely wants the best for his friends and those around him. Speaking of friends, he has amazing platonic relationships, always wanting to be their loudest supporter, no matter how bad Squidward is at the clarinet. Spongebob’s friends even create a full support structure, Patrick to relax with, Sandy to push him to improve, Mr. Krabs as an experienced authority figure, and Squidward for him to help find happiness again.

Even though the show has continued for so long, they haven’t “Flanderized” the characters, that is to say reduced them to a single idea. When the Simpsons started, Flanders was a happy neighbor with a religious background. As the show continued, he became nothing but a serious of church and Jesus jokes. Other shows like Family Guy have also done this, taking Stewie from a charismatic evil genius, to a series of gay jokes with a time machine.

I’d say the last piece that makes Spongebob so great, is the effort that is clearly put into the production of the show. From amazing songs like “Campfire Song Song,” to a joke about the 1922 silent film Nosferatu, to a diverse cast of characters that makes Bikini Bottom feel lived in.

Disney’s musical comedy show only lasted for four seasons, but is arguably the best cartoon show they have ever made. The creators not only both worked on the Simpson’s, they also both worked on Rocko’s Modern Life by Hillenberg, and one worked on Spongebob. They clearly had an understanding of what makes a good cartoon, but they exceeded all expectations.

Whereas a lot of Spongebob’s humor are ridiculous kids jokes that adults can’t stop themselves from laughing at, Phineas and Ferb have full complex adult level jokes, just about kids topics. There are multiple subplots that, while short, feel layered and nuanced, between the Agent P-Dr. Doofenshmertz-Major Monogram-Carl subplot, to the Candace-Jeremy-Stacy, or even the Buford-Baljeet subplot. There are so many stories being told over the course of the show, and they all have the perfect balance of keeping us interested, while not pulling attention away from the titular characters themselves.

Lastly, not only are there strong friendships like in Spongebob, but there are also strong family values portrayed on screen. The Flynn-Fletcher household is clearly a broken one, seeing as how Ferb is Phineas’ step-brother, and Isabella Garcia-Shapiro is half Mexican-half Jewish, allowing for some healthy cultural representation, as well as Baljeet’s strong Indian family and traditions.

The last great American kids cartoon on this list, is one that is not only extremely different from the previous two, it’s also heavily based on Anime. Avatar: The Last Airbender is just short of an actual adult series. With storylines about war and military propoganda, feminism, and hate crimes, Avatar refuses to hold back just because their target demographic is under 15.

This show is very much a fantasy story, but instead of pulling from Northern European settings, it instead pulls from Eastern Asia settings, including Inuit tribes and martial arts. Not to mention this show had a representation of abelism, including recurring characters that were blind or paraplegic. Even in a world were a decent chunk of the population had Force-like abilities around specific elements, non-benders were still respected and had a place in the world. They weren’t seen as lesser, even though they had their own insecurities, showing how self-perception and outsider perspectives are often very different.

Children who are forced to grow up too early, this series shows their vulnerabilities, and their fears. Zuko, the primary antagonist of the series, is not only shown having a redemption arc, because no one is beyond forgiveness, but we see the work he has to put in, and the difficulty he has, because it’s never easy. There are strong female characters on both sides of the war, as well as patriarchal prejudice, and reactionary acts of war.

Avatar: The Last Airbender holds nothing back, and trusts that their audience of teens, and younger, will not only be able to understand, but empathize with their characters.

What’s your favorite kids cartoon? Let us know in the comments below!