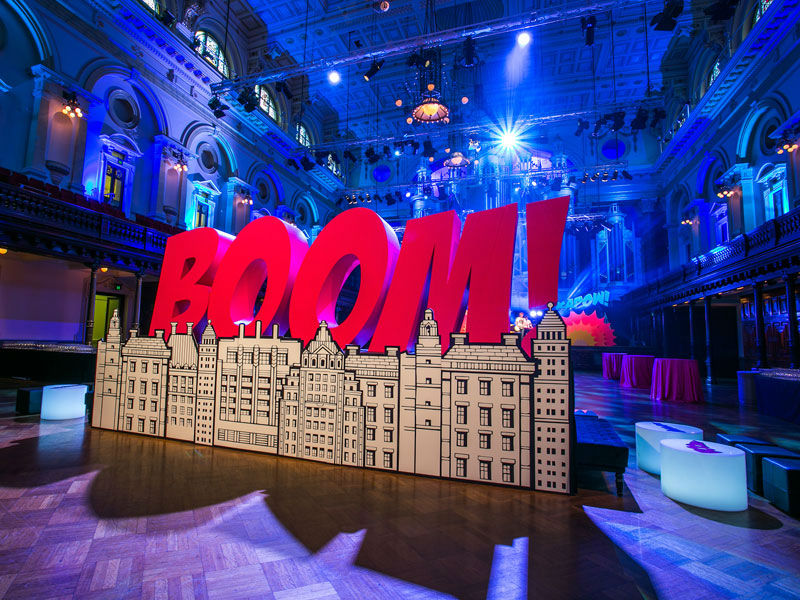 Razzel-Dazzel ‘em, and they’ll make you a star!

There is no denying that we live in a world focused on “the next big thing”. We, the consumers, are both witness and collateral damage to a constant war between studios vying for our business, a war in which money is the ammunition. Summer blockbusters dominate the scene, and sequels have been churned out at such a pace that they are no longer a rare surprise, but an expectation. Between television series, direct to video, and major screen productions, there has become a steady stream of flashy, special effect driven productions that seem to often lack substance. With the demand for super-heroes, super-humans, and magic at an all-time high, we are left to wonder: Is there a way to breathe new life into our stories?

All The World’s A Stage

Comic book culture is no stranger to the stages of Broadway, many of our most beloved stage shows have roots in comics, such as the 1976 commercial success, Annie, which is based off the 1932 comic strip Little Orphan Annie. Annie the musical has had so much success that is has spawned three movies, a stage sequel, and is estimated to be produced on stage 700-900 times a year in the United States. Broadway has even played home to Superman in the 1966 musical It’s a bird… It’s a plane… It’s Superman! Superman has enjoyed moderate success on the stage, with several recurring productions over the years in the United States, London, and most recently, Germany. With a 2-dimensional Lichtenstein inspired set design, Superman was made to feel like a singing comic-strip. No technical or acrobatic stunts were used, and the only “flying” done was performed by a cardboard cutout. Audiences have enjoyed the simplicity of the performance, and though they weren’t wowed by flashy special effects, they were left feeling a nostalgic happiness that was provided by the original comics.

He Can Swing From A Web, But Can He Star Onstage?

Broadway hasn’t always been a friend to our favorite heroes, though. Anyone who knows anything of Broadway and superheroes will find it hard to forget the disaster that was Spider-Man: Turn Off The Dark. What endeavored to be an unmatched spectacle of acrobatics, technical effects, and music, icily spiraled off the tracks and became one of the biggest failures in Broadway history. Spider-Man is the most expensive Broadway production in history, with production costs of $75 million. After facing a series of incredibly difficult setbacks, including serious injuries to several cast members, Spider-Man lost a lot of the momentum that had been built around it, and the show became notorious for its tragedies rather than its triumphs.

“Spider-Man was about to jump off the Brooklyn Bridge to go catch Mary Jane. She was falling in slow motion. He was supposed to swoop down and catch her. Instead his safety cord or cable seemed to have broke, and he went flying into the audience and he crashed down into a hole in the set.”- Audience member recalls the near-death accident of Spider-Man actor Chris Tierney, which left him with a skull fracture and crushed vertebrae (Source: WABC News)

Spider-Man was ultimately forced to close after three years of struggling to get the show off the ground. In the end, the show suffered a net loss of nearly $60 million in sales, making it one of the biggest stage disappointments in history.

The most recent attempt at blending pop culture and stage shows is JK Rowling’s Harry Potter and the Cursed Child. Rowling created a media frenzy when she announced a continuation of her beloved Harry Potter series. Harry Potter and the Cursed Child, however, seemingly caused a split amongst the very loyal fan base. In a year that was plagued with accusations of “Potter-Fatigue,” the release of The Cursed Child came as both a blessing and a curse. Fans around the world rushed to the stores to obtain a copy of the script, and tickets for the stage production sold out almost immediately. Fans of the book series took to the internet to express their discontent with the continuation, stating that it betrayed the original storyline and read like a poorly written fan-fiction. The play itself has received rave review from critics, claiming that it is a “Triumph,” which, “-in all key respects, it grips, it stirs, it delights.” (Source: Dominic Cavendish, The Telegraph). The stage production’s “Keep The Secret” campaign has worked very effectively to hush many audiences from discussing the intricate details of the show, leaving those without tickets to only speculate if the magic can truly come to life on stage.

From orphans to superheroes, high-flying acrobatics to the magic of the wizarding world, the stage is becoming ever more a home to our most beloved stories. In the battle for consumers being fought on the big screen, do the players of the stage stand a chance? Is the theatre a strong enough platform to support such massive stories?

What’s your favorite nerdy stageplay? Let us know in the comments below!