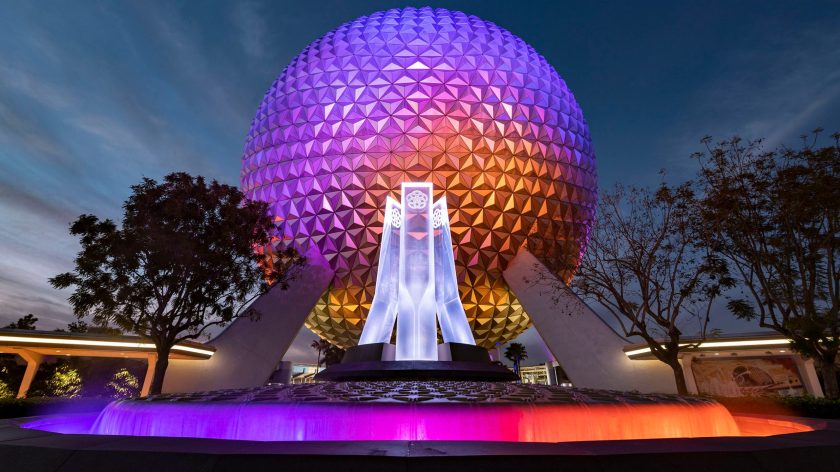 On this site, I usually talk about movies, comics, etc, but every now and then I actually treat this like a classic blog, and want to talk about adventures I’ve gone on. Well, as you may know, we are (recently) based out of Florida, near Orlando, which means that on a lazy Sunday, we might head over to Disney World. Well, as we have only recently moved here, The Nerdd Team hasn’t been to EPCOT since we were small children, and it was nothing like I expected. So here we go!

The first thing I want to mention is, just like our day at Universal Studios, see what direction the majority of the guests are going, and go the other way. With both of these parks, that means that once you enter the parks, take a hard right, and follow that path. You will spend most of your day away from the biggest crowds, which means shorter lines.

The first thing I want to mention, is of course the Covid situation. Not only am I and my wife fully vaccinated, we also kept our masks on throughout the day (save for a few photo ops or eating while socially distant). The park was not very crowded, and it was easy to keep six feet from people, and the lines had six feet markers which *most* people obeyed. The cast members that were present in lines were also good at enforcing social distancing.

The first thing I noticed, was how few rides there are in the park. There are about nine rides at the park, and we rode all of them, which took up a fraction of our total time at the park, including waiting in lines.

However, the big part of EPCOT is all of the different countries you can visit, and the food and (alcoholic) beverages you can get from each.

If you follow from right to left (like I did), first you head through Canada, where you can get maple syrup flavored food. I was on the hunt for some poutine, but couldn’t find any.

Then you have the UK, where you can hit a pub. Again, I tried to find a place to get a cuppa tea, but they only sold tea by the box. I was starting to worry that I wasn’t going to find food I’d enjoy.

Luckily, France saved us. Beignets, Macrons, and a glass of Chardonnay was a nice start as we sat by a fountain.

Morocco was a cool area, with a hidden rug shop in the back. As I continued through the day, I realized that most countries had a little spot of relaxation, if you could find it. The entire day was so relaxing and slow paced, that I forgot I was at a theme park at all.

Next was Japan. I really enjoyed visiting Japan, as I used to live outside of Tokyo for three years. A glass of sake with some Frushi (Fruit Sushi) and a pork shank was delicious, and in the shops I saw some drinks that I hadn’t seen since I lived in the Land of the Rising Sun, like Pocari Sweat and CC Lemon.

We kind of breezed through America, for obvious reasons, but it was fun seeing how other countries view us. Being American, I wondered what our “cultural food” was, but once I saw a BBQ stand with a huge smoker, I knew there was no other option.

We were certainly looking forward to Italy all day, because pizza is a food that we all understand, and made a great comfort food break, halfway through the day. I hesitate to call it lunch, because we were constantly eating.

We only made a short stop in Germany, as I had to grab a classic dark beer from the place that perfects the craft.

China had a great atmosphere, but the Crab and Cheese wontons might have been the best dish we had all day. And the Boba tea paired with it wonderfully.

We didn’t grab any food from Norway, but the mini Viking gods museum was a fun find. In fact, many countries had these mini-museums, with just a few artifacts, a few plaques, but were a nice little touch of education amongst the entertainment.

Last stop is Mexico which had such yummy food, we actually went to two different food stands. First was a tostada, then went back for a taco. Also, a good margarita to top it off.

Now, seasonally, EPCOT was celebrating the Flower & Garden Festival, which meant not only were there flowers EVERYWHERE, but in the seasonal area (between Canada and UK) was another food tent, with live music and a great atmosphere. We grabbed some fried tomatoes, a slider, and a key lime tart, all of which were delicious.

Overall the day was amazing, relaxing, mature, and just exactly what I wanted on a lazy Sunday, even though we were at Disney World.

Fun side fact, Chanel has been playing so much Spyro speedrunning on her Twitch, that when she saw Figment the Dragon, she thought it was Spyro. Go check her out on Twitch.tv/ChanelTheNerdd .

What’s your favorite part of EPCOT? Let us know in the comments below!