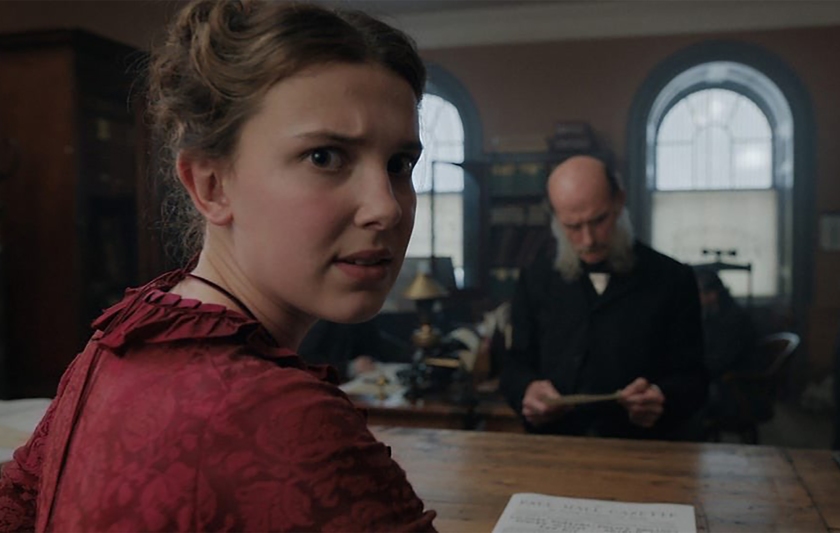 On Wednesday, a new Netflix film is coming out, called Enola Holmes. You might have heard a few things about it. First, it’s about Sherlock Holmes’ younger teenage sister, who is attempting to prove she is a better detective than her famous older brother, based on a book series by the same name. Next, it’s got an all-star cast, with Millie Bobby Brown (Eleven in Stranger Things) as the titular character, Henry Cavill (Superman and Geralt of Rivia) as the world’s greatest detective, Sam Claflin (Finnick Odair in Hunger Games) as the secretive eldest sibling, and Helena Bonham Carter as Momma-Holmes. The final thing that’s been talked about this new movie, is how it is being sued by the Sir Arthur Conan Doyle estate. That’s what we’re talking about today.

What is the public domain? Well, when you create something, you may put a copyright protection on it, so that no one can copy you and make money on your creation. However, copyright didn’t always exist, and after a certain period of time, copyright protections expire. This is so that people can use your work to influence or enhance their work, after you are no longer benefiting from it, as it is 70+ years after you have passed away.

Sherlock Holmes falls into the public domain, at least partially. According to US copyright law, any work published before the year 1923 is currently in the public domain. Most of the Sherlock Holmes stories were written before 1923, but not all of them. In 1927, The Case-Book of Sherlock Holmes, comprising of 12 short stories, was published by Doyle. This means that that single book is still under copyright protections. Normally, this would mean that those making spin-offs or adaptations of Sherlock Holmes should just avoid those specific stories, and instead focus on the abundance of great, public domain, stories, such as A Study in Scarlet, or The Hounds of Baskervilles, which are some of the most popular.

Unfortunately, there is one key difference about Sherlock in The Case-Book.

You see, in the majority of Sherlock Holmes canon, Sherlock is a cold, calculating man, who avoids relationships or emotions, because they get in the way of his work. He is also very disrespectful to women in general.

This was the hero that Sir Arthur Conan Doyle was interested in writing for most of his famed career.

After the stories that are now in the public domain, and before the Copyrighted Stories, the Great War happened. In World War I Conan Doyle lost his eldest son, Arthur Alleyne Kingsley. Four months later he lost his brother, Brigadier-general Innes Doyle. When Conan Doyle came back to Holmes in the Copyrighted Stories between 1923 and 1927, it was no longer enough that the Holmes character was the most brilliant rational and analytical mind. Holmes needed to be human. The character needed to develop human connection and empathy.

Conan Doyle made the surprising artistic decision to have his most famous character—known around the world as a brain without a heart—develop into a character with a heart. Holmes became warmer. He became capable of friendship. He could express emotion. He began to respect women.

It just so happens that these are the specific stories that have copyright protections. That means, if Sherlock Holmes has emotions, or respects women, in any adaptation, that he is actually the version of the character from the final book. Supposedly.

In the new Enola Holmes, Sherlock doesn’t play as cold, calculating, and emotionless as he is in the majority of the characters canon. Instead, he is shown to have at least some level of humanity to him. Therefore, according to the Doyle estate, this is the copyright protected character, not the public domain character.

We’ve Seen This One

They aren’t! Apparently, this is something that happens every single time that someone makes a Sherlock Holmes adaptation. Essentially, they demand a licensing fee, that is very modest, and threaten any company that makes anything Sherlock that they will make it very difficult for that company. They intentionally make the licensing fee less than potential legal fees, so it just makes more sense for a publisher to just pay out the fee, instead of fight it in court. This way they can make a little bit of money from the single most adapted human literary character ever.

Why do they do this? Surely they have enough money from the initial sales of the famous books, that they would have managed appropriately right? According to rumor, not only was there not a lot of money from the estate upon his death, but his daughter-in-law, a Georgian Princess, actually purchased the estate from the family, defaulted on her loan, where the estate was reverted to the Bank of Scotland. After that, a television show producer bought the rights, made a show, and the rights to *most* of the works went into public domain, as it was written pre-1923.

Overall, it’s just been a big mess, and the Doyle estate is just trying to make money on their great-uncle’s creation ever since.

Which (copyright infringed) version of Sherlock Holmes is your favorite? Let us know in the comments below!