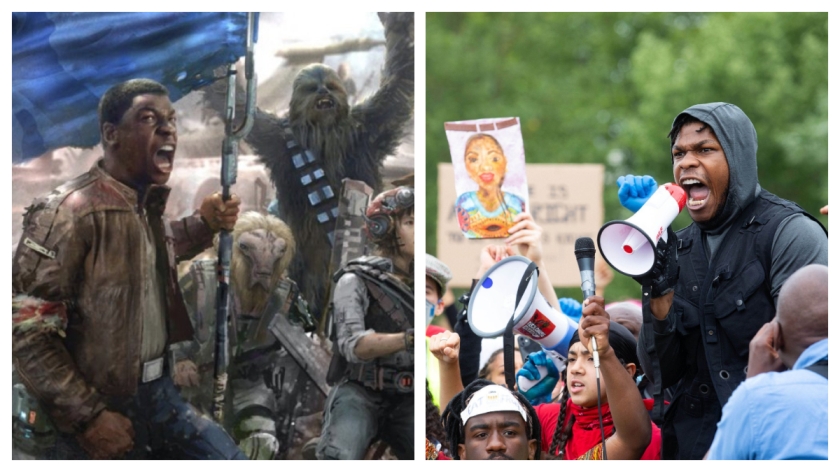 Before we begin, this is a post about the #BlackLivesMatter movement. If you don’t want to hear our opinions, that’s fine, you don’t have to read this article. We have a platform, an audience, and we believe it is therefore our responsibility as citizens to speak for what we believe is right. As The Nerdd, we have always strived to bring positive content but still talk about matters that are important and relate those important lessons we learn from our favorite things to our own lives and issues. Recently our world has been shattered and the entire team feels that it is time to fight and take those lessons and apply them to now, as what we do today will define what happens to our country tomorrow.

We started off the year with fears of WWIII and Australia was on fire.

Then the biggest pandemic in a century hit the world, and still continues to be a problem.

And now, America is tearing itself apart over police brutality and #BlackLivesMatter.

On The Nerdd, we try not to get political, we try to stay positive, we talk about movies and comics and Dungeons & Dragons. However, we at The Nerdd don’t see what’s happening as a political issue, but a human rights one.

I, Sean Tasker, am a straight, white, cisgender male, who lives in a predominately white area, with almost no crime whatsoever, though I have lived all over the country where that wasn’t necessarily the case. Chanel Tasker is a straight, white, cisgendered female who has lived in the same small town almost her whole life where the tales of brutality, segregation, and violence only existed in history, and she felt safe. The police in this town stop by children’s birthday parties and help with flat tires. I don’t see, in my immediate life, police brutality, or racism day-to-day where we are.

That doesn’t mean I don’t know 100% that it exists in America. That systemic racism exists. That police brutality exists.

Just because we don’t see it, doesn’t mean we shouldn’t believe those who live it.

What Our Stories Tell Us

When you look to stories, a lot of people look for escapism from the world. A way to not think about the problems you face in your life, and instead get to invest in stories with no real consequences, of people whose pain doesn’t truly exist, so you can take a break from whatever problems you are facing.

However, if you believe that those stories, those problems, aren’t based in truth, you aren’t paying attention.

All of our heroes, and all of our favorite stories, are all about rising up against corruption, against oppression, and about protecting innocent people from those with, or in, power.

Harry Potter, when the government doesn’t believe that there is evil in the world, leads a group to begin training, illegally, to fight against evil. Dumbledore’s Army are intentionally breaking the law, so that they can stand and fight against evil.

Luke Skywalker, joins a group who see the injustice and the brutality of law enforcement, and go and destroy property, because they see the evil in it.

Katniss Everdeen leads a revolution against the government, and against the Peacekeepers, because she knows that their peace, is not an equal peace.

Captain America understood that America is more than a country, more than a people, and much more than a flag. America is supposed to be about life, liberty, the pursuit of happiness, and that all people are created equal.

Superman knows that an American is more than who your ancestors are.

Stan Lee famously had a “Stan’s Soapbox” in the back of a lot of Marvel Comics, where he would speak out against injustices.

What Can We Do Today?

Everyone has a responsibility to do something about what’s happening right now. You don’t have to be on the front lines of the protests to be supportive. A revolution requires help from all kinds of people.

We’re taking on a few roles. First as Support Caster, by donating to bail funds, because we know that peaceful protests are being agitated into violent riots by police, and therefore people are being arrested for exercising their first amendment right. The second, later this week we will be attending a protest, and taking whatever role is needed of us; likely a Fighter and Healer.

If you don’t understand why we take the stance that we do, we are more than happy to have a conversation with you. As people that don’t experience police brutality, it is easy to be ignorant of what is happening.

If you are filled with anger and confusion, so are we.

We only ask that you have an open mind about what we are saying, because as we’ve learned more and had our world view challenged, we have changed sides on this topic in the past handful of years.

This is painful. This is a time of change and growth. Our only hope that we will come out of this better than we were before.