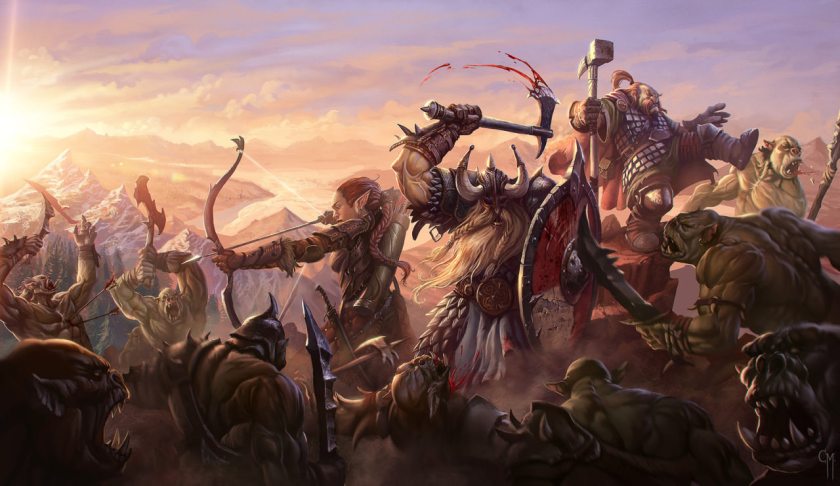 Encounters, the building blocks of adventures. The time when your players and their characters are tested. There are random encounters, but this isn’t about that. This is about one of the many steps you will put your players through as they slowly work through their adventure.

When many Dungeon Masters (myself included) build encounters, they see it as a step towards the Big Bad Evil Guy (BBEG). Any BBEG worth their weight in salt doesn’t let any adventurer walk on up and attempt to Murder them. No. They surround themselves with various tiers of soldiers and lackeys, so the BBEG only has to stop their Master Plan if they are dealing with a legitimate threat. And that’s the whole thought process there.

My question to you is: What purpose in the story does this encounter hold? Also, what are the stakes, for everyone involved?

Let’s walk through an encounter, beginning to end, and know more about the encounters place in the whole adventure.

As a note, I’ll be talking about encounters in terms of combat, but social encounters work just as well, and sometimes even exploration encounters.

Before there is a fight, there are two parties, that are not currently fighting. So what is the party trying to accomplish that is willing to fight over. Who are they upsetting enough to fight professional adventurers?

What is your party trying to achieve?

Now that you know what brought the party here, do they know what they are fighting for? Every fight, no matter how small or simple, always has a chance of death. What are they hoping to get out of this fight that is worth going into a death battle?

What is your party willing to lose?

If this is a rescue mission, is it worth it for one of your own party members to die in the process? If this is for hire, how much pain and trouble are they willing to go through for that price point? Here are some things that they might lose in a fight:

What is the Challenger trying to achieve?

What about the other side of the fight? Again, beyond the random encounters of bandits or giant spiders. What are they doing that is causing you to fight them, and why are they doing it? Are they willing to kill for it? Or would they rather just imprison their opponents, because they want someone to see the reasoning behind their actions?

What is the challenger willing to lose?

Just like with your party, what is the opposition willing to lose? Do they believe in what they are doing so much, they are willing to die for it? Are they for hire, and can be bought out? If you scare them enough, will they run away, never to be seen again, or retreat to where the rest of their forces are?

Now we’re getting somewhere. Literally. so where is this fight taking place? Fights in grand chambers with a raised Dias for sacrifices, and nothing else, is very boring.

Lastly, we want to see if this is a fair fight. We put this last because monsters can be different levels of difficulty then their base stats in the Monster Manual.

This is the hardest part to plan for, but if you took your time with the steps above, the easiest part to improvise. This should be a natural reaction to what happens.

Encounters are so erratic, because your players will always think of things you never would have. But by planning based on Strengths, Weaknesses, Opportunities, and Threats, everyone on the opposing side should react in realistic and believable ways, that stays in line with your overall story.

What is your favorite encounter that you remember? Let us know in the comments below!