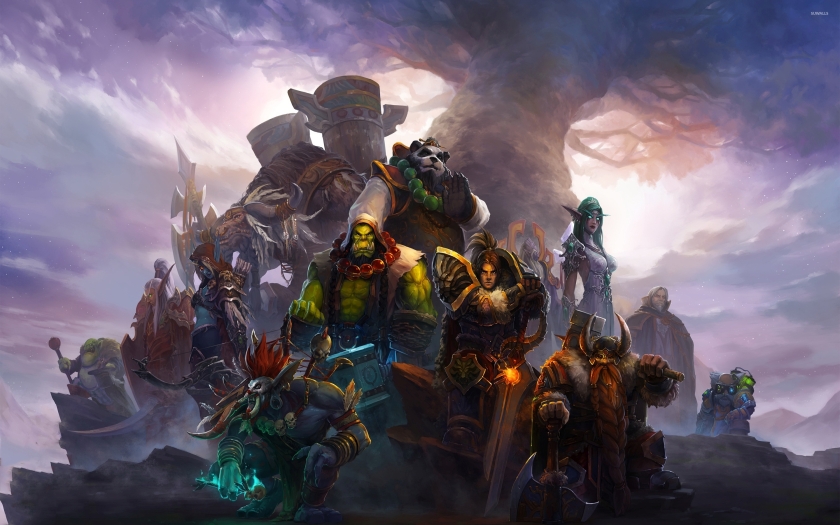 When the Warcraft movie was released in the summer of 2016, gamers everywhere hoped it would break the video game movie curse. It was met with fairly divisive reactions from “this movie was the worst adaptation of this beloved franchise” to “this was an entertaining movie, streamlining the story lines we know and love.” I personally didn’t think it was that terrible as a fan of the lore found within the Warcraft franchise. I do believe there are better stories within the history of Azeroth that would make a compelling cinematic tale. With a sequel not quite confirmed for the future, but the new World of Warcraft expansion Battle for Azeroth releasing tomorrow, here are a few of the story-lines that I think would make a great movie, or series of movies, that would entertain not only the fans, but audiences outside of the fanbase.

The Plight Of The Draenei

The Draenei are a race of humanoid people from the planet Argus. The big bad guy of the Warcraft Universe is a demon-like being named Sargeras. He showed up on Argus to corrupt the planet by tempting the leaders with power if they joined him. The three leaders Velen, Archimonde, and Kil’Jaeden were the ones approached. Velen saw the evil within Sargeras and opted out of the deal while Archimonde and Kil’Jaeden joined up with the evil entity, becoming evil god-like beings. Velen took the rest of the Eredar people from Argus and fled the planet. They renamed themselves Draenei, meaning exile. They landed on another planet and called it Draenor which also happened to be the home-world of the Orcs (which we saw in the 2016 movie). The orcs oppressed the Draenei until the orcs left through portals to Azeroth since Draenor was slowly crumbling. These portals tore the planet apart and once again the Draenei were forced to flee the planet on makeshift spacecraft. It was then that they landed on Azeroth and joined the Alliance in their fight against Archimonde, Kil’Jaeden, and the forces of evil. It’s a compelling tale, and would showcase a whole ton of other characters and races from the lore.

This story-line would be the natural way to go if we were to see a direct sequel to the 2016 movie, which ends with little Go’el floating down the river like a green, orchish Moses. Go’el is found by Aedelas Blackmoore and raised as a slave within Durnholde Keep. He was trained as a gladiator who would fight in a ring. It was here that he received his name Thrall. While being raised here he befriended a human who created a diversion, allowing him to escape. Thrall sought out his lost culture, leading him to Grom Hellscream, the only undefeated orc. Grom taught him the old ways of the orcs and told him of his heritage in the Frostwolf clan. Thrall left to find the clan he was from and upon meeting them they told him of his kinship as the chieftains son. After a spiritual awakening, Thrall became a shaman and lived with his clan in peace until Orgrim Doomhammer conscripted the clan into the Horde. They set off to liberate the Orcs from captivity amongst the humans where Doomhammer was killed and Thrall assumed the position as leader of the Horde. Thrall’s first order was to attack Durnholde and free the orcs there. Thrall then led a mass exodus across the globe allying with Voljin’s trolls and Cairne Bloodhoof’s Tauren. With help from Jaina Proudmore, they crossed the seas and established a major city in Durotar, the capital of the Horde. This storyline would lead straight in from the last movie and act as a tale of redemption for everyone’s favorite orc Thrall (who goes on to play such a larger role in the history of Azeroth and the good of all).

Medivh is seen within the Warcraft movie doing all sorts of magic up in his tower called Karazhan. The tower was built in a land destroyed by an enormous explosion and held together by reality bending magic. A tower was erected there by Aegwynn, the most powerful sorceress to live. Her son Medivh inherited it once she died. After Medivh’s death, the tower was left to the dark powers released there and it had become a hauntingly chill place sitting in alone in Deadwind Pass. In the game, players can choose to group up and raid what remains of the wizards tower. It’s quite a fun experience to battle your way up the tower traversing deadly games of giant chess, theatrical productions, ballrooms, and portals to the nether. It ends with a battle with Prince Malchezaar, a powerful agent for Sargeras, and an epic fight to partake in. A movie centered around Karazhan would make an amazing one-off horror film to see a diverse group of interesting adventurers take to this tower full of ghostly apparitions, demons, and creatures of the night.

The Wrath of the Lich King

Probably composing of a few movies (or even a trilogy) would be the rise and fall of Arthas Menethil, heir to the throne of Lordaeron. It is in my opinion the most compelling storyline in Warcraft lore. Arthas trains as a paladin under the legendary Uther Lightbringer, and starts to become the king that Arthas was meant to become. Things take a turn for the worse when a plague infests the lands to the north which turns humans into undead monstrosities. Arthas, his master Uther, and an old lover Jaina Proudmoore go to investigate the scourge. It culminates with Arthas ordering the genocide of the entire city of Stratholme to stop the outbreak of the infection. Uther and Jaina leave him, unwilling to kill so many innocent people. Angrily, Arthas battles the demon Mal’ganis who is seemingly responsible for the outbreak and culls the entire city of life. Arthas followed the demon Mal’Ganis to Northrend, Azeroth’s polar continent, where he found Frostmourne; an ancient and demonic blade capable of killing a deathlord such as Mal’ganis. It was here that Arthus drew Frostmourne and became a death knight, a perverted version of a paladin. After killing Mal’ganis and becoming a servant of the Lich King. Arthas would travel home, kill is father, take the kingdom of Lordaeron and turn everyone undead. From Lordaeron he would scourge the entire northern part of the Easter Knigdoms and then travel back to Northrend to don the Lich King’s armor and become the Lord of all Undead. This story would make such a compelling series of movies which would include so many other key players in the Warcraft lore.

This story could also easily flow from the Warcaft movie we have already. Varian Wyrnn was the son of King Llane Wyrnn who we have seen portrayed by Dominic Cooper. King Llane was killed and the city of Stormwind was taken. Lothar took Varian to stay in Lordaeron where an alliance was made with the kingdom of humans there to take back Stormwind. It was here that Varian became close friends with Prince Arthas and they enjoyed a friendly rivalry. Once Stormwind was retaken and rebuilt, Varian was crowned King of Stormwind while Arthas was off becoming the new Lich King. Varian would view Arthas as the ultimate traitor to the Alliance. One day in an attempt to make peace with the Horde, his boat was pirated and Varian was kidnapped. He escaped the mess, tattered and with some memory loss. He was found by Orcs in Orgrimmar where he was forced to fight gladiator style, and he earned the name, “Lo’gash” or The Ghost Wolf. It would take Varian years before he would regain memories and find his way back to Stormwind to be reunited with his son and wage war upon the Lich King. Akin to a Thrall based story, it would be amazing to see this legendary King fight his way back to his homeland, and it would be interesting to see the parallels between him and Arthas.

Any fan of the Horde loves the bleak persona of Sylvanas Windrunner. Sylvanas Windrunner was a high elf and acclaimed ranger of Quel’Thalas. Unfortunately for her, during Arthas’ rise to power and his desolation of the northern kingdoms: her culture, kingdom, and people were left broken; many fled and became Blood Elves. However, it was not enough for Arthas to just kill her. Instead he reanimated her spirit into a banshee to do his bidding. Sylvanas eventually regained her free will and bent the minds of other deathlords to serve her and rebelled against Arthas and his forces of evil. She gathered other undead denizens and took Lordaeron for herself, inhabiting the vast sewers beneath the ruined city. Her people unsteadily joined the Horde formed by Thrall and doled war out among the Alliance. She leads a strong people whose hatred knows no bounds especially against the forces of the Lich King that ruined their lives. It’s a tale of revenge for a beloved character that fans love to see. It would make a great movie to see the origins of Sylvanas.

What are your favorite Warcraft story lines? Let us know in the comments below!