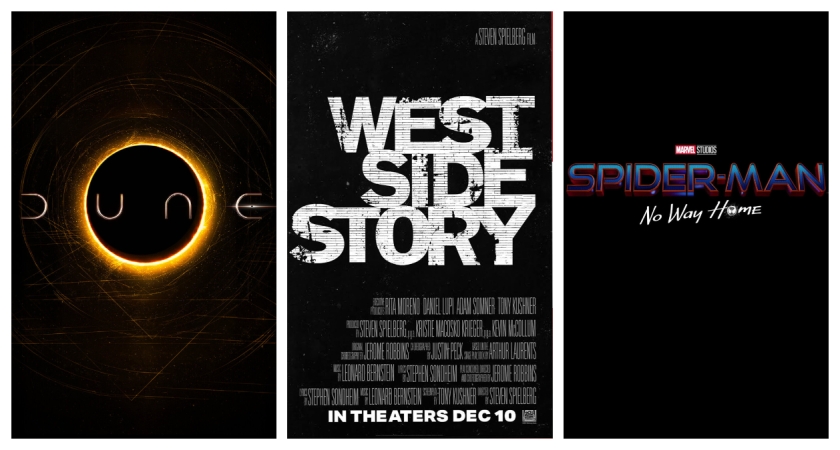 As movies slowly come back to theaters, we have some really exciting films this season, and some that I’m definitely not going to see. However, the whole point of these articles, is if you were to go to the theaters every weekend, this is what I would keep an eye out for.

Film adaptation of the Tony and Grammy Award-winning musical about Evan Hansen, a high school senior with Social Anxiety disorder and his journey of self-discovery and acceptance following the suicide of a fellow classmate.

I mean sure, Ben Platt does not look like a high schooler anymore. But here’s the thing, 1) no high school actor is actual still in high school, and 2) I’m gonna get all emotional because musicals get me every time.

Venom: Let There Be Carnage

Tom Hardy returns to the big screen as the lethal protector Venom, one of MARVEL’s greatest and most complex characters. Directed by Andy Serkis, the film also stars Michelle Williams, Naomie Harris and Woody Harrelson, in the role of the villain Cletus Kasady/Carnage.

I didn’t watch the first one, and I’m willing to bet I’m not going to see this one either. But some nerdds will!

No Time to Die

James Bond has left active service. His peace is short-lived when Felix Leiter, an old friend from the CIA, turns up asking for help, leading Bond onto the trail of a mysterious villain armed with dangerous new technology.

Daniel Craig says goodbye to Bond. I only recently got into James Bond, but I’m a bit excited for this.

The saga of Michael Myers and Laurie Strode continues in the next thrilling chapter of the Halloween series.

I mean, you gotta have a horror movie come out in October!

Feature adaptation of Frank Herbert’s science fiction novel, about the son of a noble family entrusted with the protection of the most valuable asset and most vital element in the galaxy.

I believe this movie might be the closest we’ll get to a cinematic epic since the Lord of the Rings trilogy. I hope I’m right.

An aspiring fashion designer is mysteriously able to enter the 1960s where she encounters a dazzling wannabe singer. But the glamour is not all it appears to be and the dreams of the past start to crack and splinter into something darker.

Edgar Wright of Baby Driver and the Cornetto Trilogy makes very intentional work, so I’m sure that this will be incredibly satisfying to watch.

The saga of the Eternals, a race of immortal beings who lived on Earth and shaped its history and civilizations.

The 3rd of 4 MCU shows this year. Not to mention the 6 Disney+ shows. You know, I think I might be ready for an MCU break here soon. Is there too much? This feels like too much.

Five elite hunters pay to hunt down a man on a deserted island, only to find themselves becoming the prey.

<No trailer has been released.>

The Most Dangerous Game, gets even MORE Dangerous!

When a single mom and her two kids arrive in a small town, they begin to discover their connection to the original Ghostbusters and the secret legacy their grandfather left behind.

Listen, maybe we just need to leave Ghostbusters in the ’80s. It’s okay. Also, why does Finn Wolfhard get every ’80s nostalgia project now?

Set in 1998, this ‘Resident Evil’ origin story explains the secrets of the Spencer Mansion and Raccoon City.

<No trailer has been released.>

Is this a reboot? Or is this more actually based on the video games?

A young Colombian girl has to face the frustration of being the only member of her family without magical powers.

meh. As of right now, nothing interesting is coming out that weekend.

An adaptation of the 1957 musical, West Side Story explores forbidden love and the rivalry between the Jets and the Sharks, two teenage street gangs of different ethnic backgrounds.

Did…did no one tell Spielberg about In the Heights? We already have the modern NYC love story.

For the first time in the cinematic history of Spider-Man, our friendly neighborhood hero is unmasked and no longer able to separate his normal life from the high-stakes of being a Super Hero. When he asks for help from Doctor Strange, the stakes become even more dangerous, forcing him to discover what it truly means to be Spider-Man.

The final MCU film of the year. Everyone is so certain that Tobey Maguire and Andrew Garfield are going to be in the movie, that the question now is “For how long?” So place your bets, how much screen time with the other Spider-Men get?

What movie are you most excited for this Fall? Let us know in the comments below!