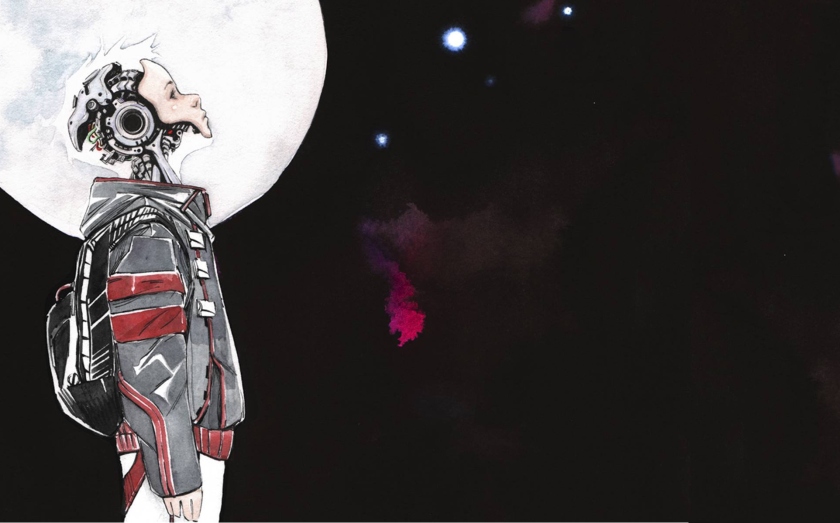 We have all grown up living in a world where the most popular comics have ranged from Batman to Spider-Man; From Superman to the Incredible Hulk. Marvel and DC comics have been a staple in the entertainment industry and hold a special place in our hearts. But there are plenty of comics that are just as noteworthy and some would say better than a lot of DC/Marvel titles, (even if they are published by DC/Marvel imprints). Here is a list of some non-DC/Marvel comic books that are well worth a read.

Hellboy was created by Mike Mignola in 1993. He has appeared in various comics, miniseries, one shots, crossovers, video-games and has been adapted into two movies with Ron Perlman as Hellboy and a reboot on the way. Hellboy is about a well meaning demon summoned by Nazi occultists and later discovered by an Allied scientist who raised him as a normal boy. As an adult he works for the Bureau of Paranormal Research and Defense. He’s a great character and the volumes published by Dark Horse Comics are found at any book store. Well worth anyone’s time.

This would be an incomplete list without Spawn. Off the back of the immensely popular Spider-Man #1; writer Todd McFarlane went on to create Spawn. Spawn chronicles the crusade of Albert Simmons who, after selling his soul to an evil entity in Hell, is brought back to life to fight crime on the streets as a brutal antihero. Spawn saw increased popularity as an Image Comic; garnering enough attention and fan favoritism that it was eventually made into a movie in 1997. Though the movie of the same name did not do as well as the beloved comic it is very much worth a read and is an iconic piece of comic book history.

Ever wonder what it would be like if Batman were evil, dressed in white, and brutally murdered people? Celebrated comic book author Mark Millar deliver’s just that. Published by Icon comics, Nemesis is about a masked man who traveled the world to learn the ways of crime and murder. Upon his return to the U.S. he wreaks havoc upon Washington DC, planning out his murders meticulously and it’s up to the chief of police to somehow stop this mayhem who is always one step ahead. A true page-turner and some of Millar & McNiven’s best work.

There is a fantastic space opera story published by Image Comics known as Descender. Written by one of Image’s best, Jeff Lemire; Descender tells of an android boy named TIM-21 trying to live in a world where androids and robots are illegal and are being hunted down. It has also grown in popularity and many clamored for film rights which is now reportedly in development. It’s an earnest and affecting tale told through beautiful watercolor art. A great choice for anybody looking for a heartwarming story.

Winner of two Eisner Awards in 2016 for Best New Series and Best Penciller/Inker is Paper Girls written by Brian K. Vaughan, (creator of Saga). The story revolves around four 12-year-old girls who deliver newspapers in their hometown. When the group is attacked by a group of teenagers who they chase into a half built house where they find a time machine and attackers ready to threaten their time-space.

Injection was created by acclaimed Moon Knight writer Warren Ellis. It is a post-apocalyptic story about five genius people who unleashed a terrifying A.I. upon the world called Injection. This artificial intelligence plunged the world into chaos, changing the universe and sending it ever closer to a mysterious new dimension. These five individuals must work together to clean up their mistake and take care of this paranormal problem that they have found themselves in.

A love letter to Christopher Reeve’s Superman, Mark Millar has done it again, this time with a heartwarming story of young Simon Pooni. Born with multiple sclerosis, and idolizing superheros, Simon is given one wish by an alien monkey named Ormon. He chooses to become Superior, a Superman-like comic book character beloved by Simon. But things are not as they seem when Ormon’s intentions are not for the best when he offers Simon’s bully the same chance at being Superior’s nemesis, Abraxas. It’s a hopeful tale and told through Leinel Francis Yu’s legendary art.

In a Mad Max-esque future, there is Tank Girl. Young Rebecca Buck a.k.a. Tank Girl is the epitome of ’90s British punk culture. With an anthropomorphic kangaroo at her side, and a tank for transportation; she will fight her way across the battered landscape of this apocalyptic wasteland with no shortage of foibles and never-dull escapades in this outrageous comic book. Illustrations by Jamie Hewlett (before he became famous for the band The Gorillaz), hearken back to a time before pristine rendered animation and gives us edgy black and white action in this thrill of a ride.

The True Lives of the Fabulous Killjoys

After the band My Chemical Romance broke up, singer Gerard Way went onto create The True Lives of the Fabulous Killjoys. It is a continuation of the stories told in the band’s last album. The Killjoys were a group formed to destroy the tyrannical mega-corporation known as Better Living Industries. A mysterious Girl was the only survivor of the last battle between the Killjoys and BLI. Now the Girl must rally all the troops that she can in order to bring about the demise of Better Living Industries.

Everybody knows of AMC’s massively popular TV series, The Walking Dead. Just as well known is the comic book series that it is based on which has been ongoing since 2003. The story is largely the same as the show; Rick Grimes and his band of zombie apocalypse survivors must exist in a world where the dead still roam the earth. It’s a new spin on a classic concept and is a must read for any fan of the comic book storytelling medium. If you are new to the series, give it a read. Tired of the show? Pick up a volume of the comic. You will not be disappointed.

What are your favorite Non-Marvel/DC comics? Let us know in the comments below.