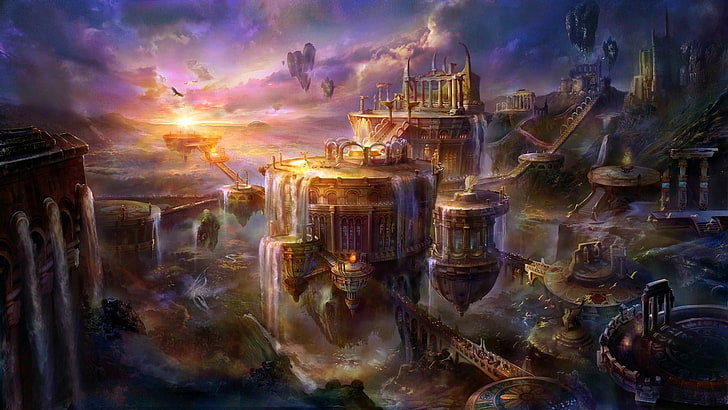 You want to build your own world. This is great. There are two schools of thought. The first is to start with the village your adventure is going to take place in, and grow from there as needed. However, if you want to build a world for the sake of building a world, this guide is for you. This is closer to the path a fantasy writer would take, but we specifically want it to be built for other DMs to grow the story and details of your world for Tabletop Roleplaying Games (TtRPGs). We are going to start at the beginning. From the outside in. It’s best to do so in this order.

Also, this is not the end all be all of your world building, but instead just tells you what the next most-helpful part is. Each topic has tons of help from the rest of the internet to dive deeper into.

Aesthetic of Your World

First things first, what makes your world different than the ones that already exist? Surely, if you’re just going to be in a non-descript high fantasy world, where magic is prevalent, and different races intermingle in large cities, you would just play in Faerun. It’s assumed that if you are creating your own world, it’s because there is a style or aesthetic that is missing from the current selection, and you want to make it yourself. So what is that style?

For example, here are several currently existing settings, here they are with what I see as their aesthetic.

Now that you know what the feeling and style you are going for is, next we are going to be making two of the most complicated systems for the whole thing. The Gods, and Magic. Both of these take a long time, and can be closer to boring than exciting, however because these two aspects of your world are so important, and affect literally every other part, we have to decide these things first.

When creating a Divinity system, you have to decide first, will there even be gods, if so, how many, next how do they organize themselves, and finally how powerful are they?

The other major aspect of Higher Power, is magic. Magic is such a strong part of fantasy that to exclude it entirely is rare, and often falls more under historical fiction than actual fantasy. With any magic system, you have to decide, will it be “Hard” or “Soft” Magic? For a deeper understanding, read this article, but the general idea is that you have to decide how many rules and restrictions there are to your magic system. The less you have, the more “fantastic” it feels, but it becomes more difficult to work with. Especially in TtRPGs, it’s safer to create more rules and be a “harder” system, so that the game can be more balanced.

There are so many things to consider with magic that I could never get everything. Both Divinity and Magic systems take so much time, that you don’t have to have every aspect of it planned out before you can continue, but you should be able to have a strong grasp of what exists, and how it affects everything else.

In most settings, humans are the most popular race, with humanoids such as dwarves, elves, and halflings the next most popular, then you get into the rare monstrous races such as dragonborn, orcs, and more. Is this the case with your world, or is the racial makeup different? This tends to fall under the aesthetic you’ve chosen, as well as your higher powers.

If you have multiple gods, did they each create a race, or are certain races drawn to certain gods for any reason? Are any races more predisposed to be able to use magic, or different styles of magic? The same questions can be asked about the creatures of the world as well. Non-intelligent animals are just as important in your world, and adding or removing any from the Monster Manual is an important decision, because there needs to be some reason why, even if that reason is just simply “it doesn’t fit the aesthetic.”

I love maps! Especially fantasy maps, it’s so interesting how when you describe a location, how it looks, feels, smells, you can envision it, but once it’s on a map, it really feels like a place you can go visit. If there is anything from above that designs the physical layout of your world, that’s great, but if you know you want to make a map from scratch and aren’t sure how to, this is my favorite method.

A Drop Map. The idea here is that you get a big blank sheet of paper, and drop a bunch of dice on it. Each type of dice represents a type of location, and when the dice rolls higher, that location gets intensified. The amount of dice you roll is up to you. I’d say start with a handful, and add another handful over and over until it feel sufficient. You might want a lot of open space, and you might want it to be dense and claustrophobic if that’s the aesthetic you are going for. Where the dice end on your map is where the ocean is if you’re designing a whole continent. If they are spread apart enough, there can be multiple continents.

None of these have to be how you do it, it’s just a starting point. If anything doesn’t make sense to be near something else, move it. However, as you look at it you’ll begin to notice that you can justify almost anything if you had to. Feel free to exaggerate some things and ignore others, because no one else is going to know, so don’t make yourself upset with how the dice land.

This might seem a little early, but this is more asking “how much history has there been?” This might be answered as part of your aesthetic, but as we get into the actual inhabitants and their affect on the world around them, we need to know how much we are planning on having. Is your world fairly young, and some civilizations believe they are the only creatures in existence, or is this an old world, and most of the cities and empires have fallen into ruins that dot the landscape?

Now that we know what the world looks like, and how long it’s been here, take another look at your list of races and creatures, and start putting them down on the map. Huge city in the forest, looks like elves; a cluster of mountains, that’s probably where some giants and dragons live. What different groups could tolerate being near each other, and what groups would make sure they are no where near something else? This is one of the easiest and quickest sections, as you should be able to see patterns emerge.

People and the World

Now that we know where everyone lives, we can start naming places. Names are obviously based on the language of those who live in that place, but that’s not all. Places are often named after people (either those that discovered and lived there, or in honor of someone else), events that happened there, or just physical landmarks. For instance, Scotland is named what it is, because the original inhabitants called themselves Skots, and the River Avon in England, Avon means River, so it’s called the River River.

Also, as you look around, think about how the inhabitants might perceive the higher powers based on their surroundings. The ancient Greeks believed that all of their gods lived very close, on top of a tall nearby mountain. If magic is strong in a certain area, then the local populace might believe it to be a holy place.

World and the People

This is where cultures will really start to build out, and it all comes down to survival. If certain people live near the ocean, then they might believe in travelling and seafood. If people live in a place where there is no ready source of food, they might grow to be scavengers, and later steal often from other places that can grow food (like vikings did). In places that are very cold, being physically close to each other is important to survive winter nights, so they might be more community based than others.

This again will go back to the local beliefs of different people, because if a civilization lives near a volcano, they might believe that there is a giant creature or god that lives in that volcano, and they wish to appease him.

Depending on the amount of history that has passed, this is when you decide which civilizations began to grow, how they grew, and if they began to interact with other nearby civilizations.

The People and Each Other

Now, we’ve gotten to the point in history where different civilizations have begun to interact with one another. Think about when different groups begin to grow and take up more space, where will borders begin to collide? How will that collision be handled by each side?

Look at the cities and groups on your map. What groups of people are likely to naturally be in that space? What kind of people will that then attract? What areas seem like they could naturally be prosperous, and who would want to come and take advantage of that prosperity?

The pitfall to avoid in this section, is as you’re writing the history, to not let it read like a history textbook. It doesn’t matter as much who was the king when, and what wars were fought or the treaties that were signed. Instead, think of specific events that would be told and referenced, or specific people of interest that made a splash. Unless you were a good US History student, you probably don’t remember that the first Civil War Union General was Winfield Scott, but you do know about the Underground Railroad, an inspirational story about overcoming adversity.

Fill In the Blanks

This is where you can get into the nitty-gritty if you like. The sizes of different militaries, the major industries, rulers currently in power, and conflicts currently under way. Luckily, any decision that you make from here on out will be based in logic, and will make sense, because everything you create now will be based on your previous decisions that are based in the natural world, so whenever you make man-made decisions, they will fit in.

There is a lot to go through to make a setting from scratch, but hopefully this guide has helped you make a living, believable world for players to explore. Come back in a few months, as I go through this guide myself and create my setting, which right now has the working title of “Archao-Fantasy.”

Are you homebrewing a setting? Let us know about it in the comments below!